Accessibility links
Monkey's Uncle Gets A Human Gene : Shots - Health News You'll hear about glow-in-the dark monkeys tonight on NPR's All Things Considered, and it's a medical story. Really, it is.

Monkey's Uncle Gets A Human Gene

Monkey's Uncle Gets A Human Gene 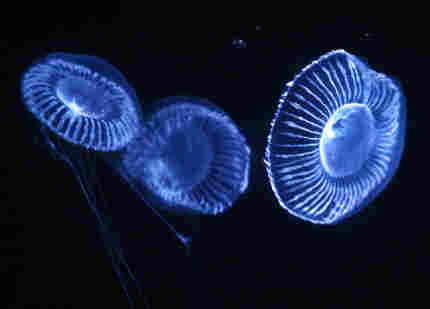 You'll hear about glow-in-the dark monkeys tonight on NPR's All Things Considered, and it's a medical story. Really, it is.

NPR's Nell Greenfieldboyce reports on the success of Japanese researchers who have managed to take a glow-in-the-ultra-violet-light gene from jellyfish and insert it into marmoset embryos. And that's not even the impressive part. The real trick was successfully getting those little embryos to grow up into adult monkeys that passed along the "glowing" gene to their offspring and descendents.

It's not just a party trick. (Scientists who figured out how to use the glow-in-the-dark substance as a label got a Nobel prize last fall.) The goal is to create a good animal model of human disease, a target that's been elusive for many devastating illnesses.

In this case, as Greenfieldboyce reports in her radio story:

"The glowing gene doesn't do anything. It just shows that an added gene can be inherited. And that's important because researchers have never achieved this with monkeys before. Now it should be easier to generate groups of monkeys with genes for diseases like Parkinson's."