We start out with some news today -- President Obama has nominated Dr. Thomas Frieden, Commissioner of New York City's Health Department, to be the new Director of the CDC. "America relies on a strong public health system and the work at the Centers for Disease Control and Prevention is critical to our mission to preserve and protect the health and safety of our citizens," Obama said in a statement announcing the appointment. 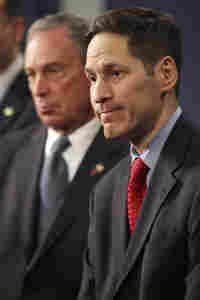 "Dr. Frieden is an expert in preparedness and response to health emergencies, and has been at the forefront of the fight against heart disease, cancer and obesity, infectious diseases such as tuberculosis and AIDS, and in the establishment of electronic health records," he added.

Obama also thanked acting-Director Rich Besser and "the women and men throughout the CDC for their superb work, especially over the past weeks." The president said he was "pleased" that Besser would be returning to his old position leading the CDC's Coordinating Office for Terrorism Preparedness and Emergency Response.

He'll jump into a thicket of problems in deciding whether to make and distribute a vaccine against a potentially pandemic flu virus. He'll be at the forefront of efforts to make the food supply safer. He's expected to nationalize his aggressive campaign to regulate smoking.

In New York City, Frieden led a crusade to ban smoking in restaurants and bars. He pushed doctors to make H-I-V testing routine. And he got the health department to track undiagnosed diabetics like an infectious disease.

-- Wall Street Journal -- Senate Panel Starts Talking Health Overhaul:
The Senate Finance Committee yesterday were briefed on the major points of the evolving health care overhaul and one top Republican "hinted" there may be room for compromise on the hotly debated issue of creating a public option plan. "I don't want to say it's a problem when you've got three or four different ways of compromising it," ranking Republican Charles Grassley said. "We might be able to find a consensus."

-- Reuters -- WHO Chief Warns Against False Security About Flu:
Speaking at an intergovernmental meeting on pandemics in Geneva, WHO Director-General Margaret Chan warned against complacency about the swine flu, saying there remains "great uncertainty" despite the apparently mild toll of the virus thus far. "We are meeting at a time of crisis that could have global implications," Chan said.

-- Associated Press -- Virus Spurred High Blood Pressure In Mice:
New research by Harvard scientists "suggest that a common virus might play a role in high blood pressure." The work "so far is only in mice -- and the usually symptomless infection is so widespread that proving an effect in people will be tough. Still, it's the latest clue that infections may somehow affect a number of the factors that lead to heart disease, from stiffening arteries to obesity."