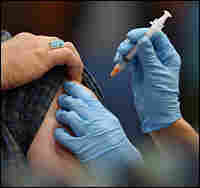 Will we all be lining up for swine shots soon? /Toby Talbot/AP hide caption

The big push to make a swine flu vaccine is on.

The Centers for Disease Control and Prevention is starting to ship vials of "seed" viruses to drug companies so they can begin making vaccine against swine flu.

Important decisions loom. Many are technical and complex. How much vaccine needs to be in each dose? Should a booster substance be added to make the vaccine go further? How many people should get vaccinated? Who?

Then there's the really big decision: Should hundreds of millions of people get vaccinated next fall against swine flu?

To make the best decision, policymakers need a good sense of how severe a disease this swine flu is. But that may be almost impossible to know, experts warn.

To establish severity, public health officials need to know two things:
How many people are getting infected in the first place? And how many die or need serious hospitalization?

Simple, right? The past few weeks have shown otherwise.

Of the nearly 8,900 US cases of swine flu counted so far, five percent have needed hospital care. A dozen people are known to have died. That's 0.14 percent, or 14 deaths in every 1,000 cases -- about the same as ordinary seasonal flu.

But in fact, public health officials don't know what the real death rate is. That's because they can't really count how many people are actually getting swine flu. The CDC guesstimates there are 20 actual cases for every laboratory-confirmed case. That's true for seasonal flu too.

The big fear is that the swine flu virus will grow nastier as it circulates through people in the Southern Hemisphere during its flu season, which is just starting. That's happened before when new flu viruses have made their debut.

Will we know if this virus is taking a nasty turn? Sure, if there's a sudden, dramatic surge in swine flu deaths south of the equator. But what if an increase in virulence is more gradual?

If Virus Takes a Nasty Turn

"It's hard to be very precise in these ranges that we're seeing right now of 0.15 percent of all cases resulting in death," says Dr. Anne Schuchat of the CDC. "So whether we will be able to pick up any incremental change in severity, I can't promise."

But tiny increments can make a big difference. The worst flu pandemic known, in 1918, only had a death rate of about 2 percent. The problem was, because the total number of people infected with the virus was huge, a death rate of two percent was a big number, too.

There's another difficulty. Few people are already immune to swine flu because it's so different from any previous flu virus. So more people are likely to get sick after being exposed. (Some people in their mid-50s and older may have some immunity because they were exposed to distant cousins of this virus that made the rounds decades ago. But they'd only have partial protection, if that.) This general lack of immunity around the world will drive up the number of deaths, even if the death RATE turns out to be the same as seasonal flu.

Put A Number On It

A new analysis from Harvard, the University of Hong Kong and Imperial College in London puts a number on the problem. Let's suppose, the researchers say, that twice as many people get sick after exposure to the swine flu virus as would fall ill after exposure to more typical flu. Even if the new virus is no more virulent, it would cause three times as many deaths, according to their analysis, which was published online Wednesday by the New England Journal of Medicine. That translates to more than 100,000 deaths in the United States, versus about 36,000 in a typical flu season.

Is that enough of a threat to unleash a mass vaccination campaign against swine flu, even if the illness it produces remains "mild" in most people? That's a question likely to confront policymakers just a few months from now. And they might not have much more information than they do today.