Accessibility links
Eat Like A Greek (And Drink Like One, Too) : Shots - Health News Greek researchers teasing out secrets of long life say same some parts of the Mediterranean diet are more crucial than others. 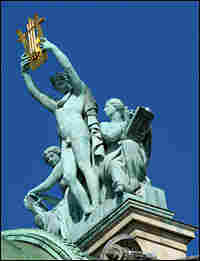 Sure he was the sun god, but what did he eat? /istockphoto.com hide caption

It's easy to eat like a Greek in the summer. A drizzle of olive oil over ripe veggies, lightly grilled fish, glass of wine, maybe some fruit and you're done. Who needs Ben and Jerry?

But a new study from Greek researchers who are intent on teasing out the best of the best diet suggests that some parts of the Mediterranean cooking and eating style may be more important than others.

In their ongoing, multi-year survey of 23,000 Greek men and women, Harvard professor Dimitrios Trichopoulos and several colleagues were surprised to find that eating more fish, seafood and cereal, and limiting dairy seemed to have little influence on longevity. Instead, the diet's keys to long life seemed to be the extra olive oil, the lack of meat, and the moderate drinking of wine.

Now, this is only one study with a number of limitations (Chief among them: It's a survey that asked people to recount what they ate. Survey respondents sometimes forget and lie.) Nutrition science especially, tacks and jibes like a sailboat in a shifting wind. Overhauling your diet based on just one bit of research is never a good idea, the best scientists will tell you.

Still, eating like a Greek -- or at least the way most Greeks used to -- seems sound, most nutrition researchers agree.

NPR's Joe Shapiro spent some time with Trichopoulos for a story in 2007, and talked to other scientists on Crete, too. As Shapiro notes,

One irony is that today, people in Crete have succumbed to the same bad eating as Americans: Fast-food, prepared food and eating on the run has led to high rates of obesity in children, even higher than among kids in the U.S.

Trichopoulos has another line of research that Shapiro found at least as appealing as the Greek diet. A healthy lifestyle's crucial to long life, too, Trichopoulos says. Don't forget to nap.