Hello, Haven't We Met Before?

Hello, Haven't We Met Before? 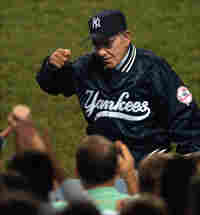 "People want change, but they know if it's not done right they will pay the price," Greenberg tells NPR's Melissa Block in an interview today.

That, he said, puts the onus on would-be changers of the status quo to explain how a significant overhaul wouldn't disrupt the care that people currently like. "Opponents have a tag-line -- government takeover."

Supporters? They've got nothin' that catchy.

But Greenberg stopped short of saying that he thinks the current effort is as doomed as the last one. In terms of public opinion, "they still tilt toward doing this," he says. And it helps that, unlike the Clinton administration, Obama is taking on the health care issue early.

"Only bad things happen if you drag this out," he says.

Listen to more of Greenberg's take later today on All Things Considered.