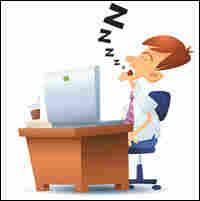 If a sleepless night makes it hard to think, blame your brain -- and your genes.

The finding, published in this week's issue of The Journal of Neuroscience, comes from a study that compared the brains of people with two different forms of a gene called PER3. The "short" version of PER3 makes you resilient to sleep deprivation. The "long" one leaves you vulnerable.

Researchers had a couple of dozen people with long and short versions of the gene stay up all night. Then they slid the sleepy volunteers into a brain scanner and asked them to do some simple memory tests.

Genetically resilient people did a lot better than the vulnerable people. In fact, one person with the vulnerable version of PER3 got booted from the study because he nodded off inside the scanner.

Brain scans offered some hints about why people with the resilience gene performed better. The scans showed that these people had brains that responded to fatigue by "recruiting" extra brain structures to help them do the memory test.

Meanwhile, vulnerable people didn't get any help from other parts of the brain. And they had reduced activity even in the brain structures normally used to complete the test.