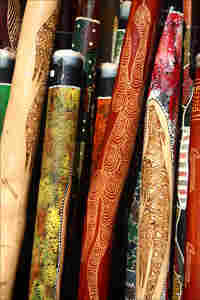 It all began with a didgeridoo.

A couple of years ago, a Swiss sleep researcher with musician friends discovered that some snorers with sleep apnea who took up the Aboriginal wind instrument were suddenly resting better at night. Quieter sleep (happier mate). Much less snoring and gasping for air. And less exhaustion during the day.

Best of all, no need for surgery to fix the source of their problem--flapping, flabby tissue at the back of the throat. And no need to be tethered by a mask to a forced air compressor all night long, which is the standard method for keeping the airway open.

Somehow, playing the didgeridoo every day was toning the flabby muscles in the mouth and neck.

A small, randomized study confirmed the benefit in volunteers with mild and moderate apnea, after just six weeks of music practice. But could other wind instruments work, too?

This week, at a big sleep meeting in Seattle, we got a hint of an answer from a guy who's been studying hundreds of professional musicians of all types, looking to see who gets sleep apnea and who doesn't.

His suggestion for sleepy trombonists: Consider taking up the oboe.

"People who played high resistance, precision instruments like the double-reeded oboe...were much less likely to have apnea than other musicians and singers, but that wasn't true for tubas or trumpets. That surprised us," says Christopher Ward, himself a lapsed horn player, and sleep researcher at the University of Houston Clear Lake.

No firm answers yet as to why, but Ward suspects that that the circular breathing technique common among oboists and didgeridoo players might be key. Already, Brazilian doctors are working on similar exercises they hope will help.