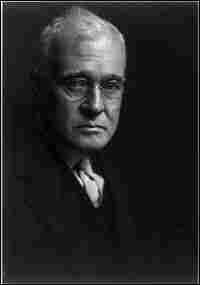 Talk about Slow Food: Raise your hand if somebody, somewhere along the way, has told you to chew your food "32 times (or 50 times or some other big number) before swallowing?"

That advice, we learn from NPR's Allison Aubrey in this week's "Your Health" podcast, started not with your grandma but with the Victorian industrialist-turned-food-faddist Horace Fletcher.

A British tycoon with friends in high places, Fletcher convinced the likes of Thomas Edison, Henry James, Franz Kafka, John D. Rockefeller, J.C. Penny and legions of everyday eaters that if only everybody chewed their food to the point of liquefaction, the world would be a better place.

But does all that chewing make any difference to health?

In 1928, a few years after Fletcher's death, a Chicago physiologist apparently decided to put the method to the test. Every couple of years, he'd swap his usual gobble-and-go lifestyle for an 18 month stretch of dedicated mastication.

Time Magazine pooh-poohed the results in its write-up, though it noted the man's calorie intake dropped from 3,200 per day to 2,800 "probably because so much munching made his mouth tired." Beyond that,

His weight declined 30 pounds. His muscular endurance sank far down, as did his basal metabolism, and his efficiency upon the typewriter. His blood pressure, pulse, temperature, sleeping time, and ability in mental multiplication remained unchanged by Fletcherism. The only beneficial effect he found in Fletcherism was a marked increase in his ability to solve chess problems.

Never mind the chess, what about those 30 pounds?!

To hear more about wildman Fletcher and what modern nutritionists think of him and his theories today (as well as a great story about the Finns and their love of gum -- YES, there's a health angle), download the podcast here.

Check it out, already. And keep chewing!