Accessibility links
Readmission Data May Cause Pain For Hospitals : Shots - Health News Hospitals who don't get recidivism rates under control may feel some pain under a health care overhaul, and the government releases new data to help the public compare them.

Readmission Data May Cause Pain For Hospitals

Readmission Data May Cause Pain For Hospitals 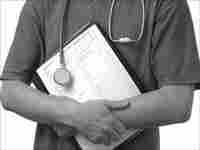 If you get out of the hospital after heart surgery and you have to go right back because you have pnemonia, it might mean the hospital didn't address your health problems properly.

It costs the health system billions to readmit patients, and it happens a lot -- one out of five Medicare patients are readmitted within 30 days, says CMS.

Hospital Compare, the government website that tracks hospital quality, yesterday added new data that will make it easier for the public to compare hospital recidivism rates over the last three years.

The stakes are high for hospitals. As part of the health care overhaul, President Obama wants to penalize these kind of hospital readmissions -- a controversy is brewing already.

But hospitals are fighting back, saying that they don't get enough credit for treating the poor and uninsured, who have limited to no access to primary care and use the hospital instead.