Would A New Name Change The Health Care Game?

Would A New Name Change The Health Care Game?

Rockefeller tells All Things Considered's Robert Siegel in an interview to air Friday night: "I don't think people like the name."

The public option -- the government-created, non-profit health insurance program being proposed to compete with private insurance -- gets high marks from some, but others fear it means the government will take over health care. 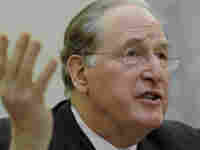 "I wish we could call it the ice cream option... because it's the free market system. If people don't want anything to do with the public plan, they keep what [insurance] they have... it's optional, optional, optional," he says.

Rockefeller said he would not vote for a bill unless it includes "something very similar to a public plan" and rejected the alternative health insurance model his colleague Sen. Kent Conrad (D-N.D.) is proposing as "unlicensed, unregulated, and untested."

Conrad's plan, called the co-op model, is based on a very small number of existing insurance programs that are member-owned and member-driven, and apparently popular with members. It's attracting the attention of Republicans and Blue Dog Democrats, and is reportedly in the Senate Finance Committee's latest health overhaul bill draft.

But Rockefeller and other liberals are annoyed that a key concept of the President's may get passed over.

"Except for three people... Whatever you do and whatever you call it, they are going to vote against it," he says.

Incidentally, the senator is nursing a torn muscle in his leg -- "one of those things that makes me care about health care." He expects to return to West Virginia next week.

Listen to All Things Considered tonight for the full interview.