Accessibility links
Don't Mess With Raccoons : Shots - Health News A survey of backyards in suburban Chicago turned up many raccoon latrines laden with parasites that can invade human brains. But don't worry too much.

Sure, they're cute and clever. But, as if the risk of rabies weren't bad enough, some masked critters are loaded with raccoon roundworms that can find their way into humans -- most notably toddlers -- where the parasites can burrow into the eyes or brain, causing blindness, convulsions and even death. 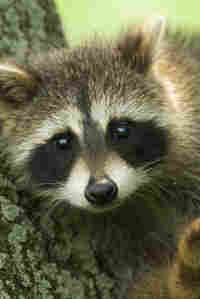 So young. So cute. So chock-full of parasites. iStockphoto.com hide caption

A recent survey of 119 backyards in suburban Chicago turned up "raccoon latrines" in roughly half. Raccoons tend to choose elevated spots for doing their business -- decks, patios, woodpiles, flat roofs and playhouses.

Wheaton College ecologist Kristen Page and her students found that scat from 21 such spots was heavily contaminated with the worrisome roundworm Baylisascaris procyonis.

Page says her findings, to be published in the September issue of Emerging Infectious Diseases, dovetail with other studies suggesting that between 20 percent and 80 percent of raccoons in various regions are infected with the worm.

Cities have been hit, too; even Brooklyn had a couple of human cases last spring. (Dogs, but not cats, can become infected too, apparently; vets say the worming meds you regularly give your dog will eliminate any threat to the canine).

No need to panic, says Page. And put down the shotgun.

Fewer than 20 serious human brain infections from raccoon roundworm have been documented in the last 30 years. And though Page and other experts are sure that's an undercount, fatal infections are still certainly rare, so inherited or other factors may shape who gets sickest. Though the illness is unnerving, there are good ways to protect yourself and the neighborhood kids without ridding the world of wildlife.

First, tightly cap the trashcans and compost piles that are luring raccoons to your yard, and bring pet food dishes inside at night. Bird feeders and fishponds may be lures, too.

Next: Be on the alert for raccoon latrines (this study has photos), and clean up the scat as soon as you find it. Raccoon scat is dark, about the size and shape of your thumb, and often full of seeds.

Wear disposable gloves and a drugstore dust mask to gather the poop and an inch of underlying soil, and then get rid of it all in a sealed bag. Note: Inhaling particles isn't the problem; it's swallowing the eggs. Toddlers are probably most vulnerable because they're more likely to eat dirt, or mouth contaminated bark or other objects.

Final step: Pour a teakettle or two of boiling water over the area after you've cleaned it (and, of course, wash your hands with soap and water). The eggs can survive in dirt or on objects for several years, but are killed by high heat. Page does not recommend scorching the earth with a propane torch, though you may be tempted.

"Look, I'm a mom with a six-month-old daughter," she says.

Parents shouldn't be paralyzed by this. I let my little girl go out and sit on the grass. I may take a good look around before I set her down, but I think it's really important that she get outside.