Accessibility links
Candlelight: A Dash Of Toxin With Your Romance? : Shots - Health News Candles made with petroleum-based wax emit a variety of toxins when burned, though the amounts and health effects have yet to be determined.

Candlelight: A Dash Of Toxin With Your Romance?

Candlelight: A Dash Of Toxin With Your Romance?

Forget car exhaust, power plant smokestacks and factory fumes. You may be polluting your own home by burning candles. 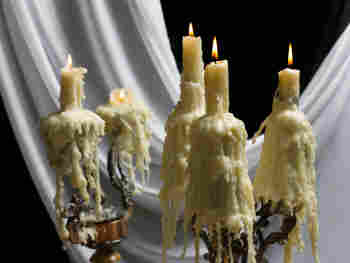 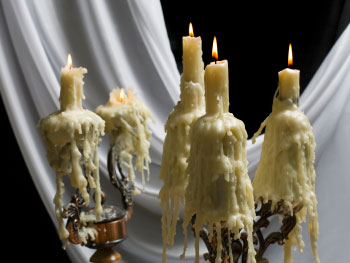 Hazardous to your health?

The neighborhood around NPR HQ in Washington is crawling with chemists attending a big meeting of the American Chemical Society this week, and we lured two of them over to our cubicle to talk about their fascination with burning candles in the lab.

Ruhullah Massoudi, a chemistry professor at South Carolina State University, and undergrad Amid Hamidi found that candles made with paraffin, a waxy ingredient derived from petroleum, gave off a variety of nasty chemicals, including toluene, alkanes (think propane, methane and stuff like that), and alkenes (like the alkanes but with at least a double bond thrown in).

Sorry for the walk down organic chemistry lane but being around all these chemists rubbed off on us.

Candles made from soybean-derived wax didn't show the same pattern of potentially toxic emissions, though the researchers caution their work so far has been only qualitative and hasn't put numbers on the stuff spewed out by candle combustion.

Massoudi and and Hamidi can't say much about the potential health effects at this point, but Massoudi says people might want to consider burning fewer paraffin candles or improving ventilation. "That's up to them," he says.

In future research Massoudi plans to examine beeswax candles as well as the byproducts of burning scented and colored candles. In a later phase, he'll look to quantify the chemicals released.

One more caveat: the work is funded by the Department of Agriculture, which wouldn't mind if soybean-based candles became the rage. As a summary of the research under the headline "Soybean Candles For Healthy Life And Well Being" puts it:

By replacing paraffin wax with soy wax in candles, an estimated 60 million pounds of soybeans would be required for annual candle production. This requirement will have a direct economic impact on soybean farmers as well as a health and environmental impact in this country.

What do the candlestick makers say? A scientist for one company told MSNBC that an industry study a few years ago found essentially no difference between the emissions from paraffin-based and vegetable-based candles.