Accessibility links
White House Says A Deal's A Deal With Drug Industry : Shots - Health News Worried about changes to health overhaul plans, the drug industry got assurances it would not have to give up more than $80 billion over 10 years.

White House Says A Deal's A Deal With Drug Industry

White House Says A Deal's A Deal With Drug Industry

A promise by the pharmaceutical industry to save the nation $80 billion over a decade in exchange for protection from further givebacks under an overhaul of health care just got validated by the White House. 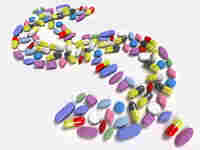 The New York Times reports that pharmaceutical companies got spooked by action in the House that would give the feds negotiating authority for drug prices and bigger rebates from the industry.

So the industry got an explicit affirmation of protection from deeper cuts, according to the Times.

Billy Tauzin, head of the trade group PhRMA and the industry's lobbyist-in-chief, explained the quid pro quo -- drugmakers stepped up first with a cost-saving pledge, and, in return, got "a rock-solid deal." A White House official confirmed Tauzin's account to the Times.

But what price lobbying glory?

An industry insider told us he was puzzled by drugmakers' chest-thumping over their deal, saying it violated cardinal rules of lobbying: Never be seen or heard, and don't ever brag about your victories.

But if a deal remains intact, then as Tauzin explained in a recent interview with NPR's Linda Wertheimer, drugmakers "would know in advance what our exposure" would be.