When Wendell Potter was a high-ranking PR exec at insurance giant Cigna, he was the guy reporters would buttonhole for the company's official answers to questions. 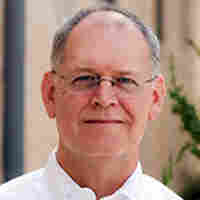 The longtime defender of insurers left Cigna last year and has since become one of the industry's toughest critics. In June, for instance, Potter told a Senate committee that insurers were "using fear tactics" to "tar a transparent and accountable -- publicly accountable -- health-care option."

In an interview with NPR's Madeleine Brand on All Things Considered Tuesday, Potter describes his conversion. It happened at a rural Virginia fairground where he saw hundreds of people with little or no insurance waiting in the rain for free medical care provided by an aid group that got started helping people in the Amazon Rainforest.

"I was just absolutely astonished at what I saw. It was almost like being hit by lightning," he tells Brand. "These people were, by and large, waiting to be treated in animal stalls that other volunteers had disinfected a few days before."

He says the insurance industry, despite its public "charm offensive," is working behind the scenes to scuttle fundamental change, including a government-run, or public, insurance option.

We figured it would be worth asking Cigna about Potter's public statements, though at the time of our request the NPR interview hadn't aired. In an email from Cigna spokesman Chris Curran, the company said:

We agree with Mr. Potter that health care reform is needed, in fact we also support the President's goal of expanding access, controlling costs, and improving the quality of care. However, we do not see how a government sponsored plan accomplishes that. Especially since CIGNA and the industry have already put forth a plan that guarantees coverage for everyone including for people with pre-existing conditions, strengthens the safety net so that no one falls through and provides subsidies for those who can't afford it, without adding to the debt burden of the country.

For more of Potter's views, see his blog for the Center for Media and Democracy, where he's a fellow.

For in-depth coverage on proposals to overhaul health care, check out NPR's series Prescriptions For Change.