If you want to take the temperature of health overhaul, check out the polls. 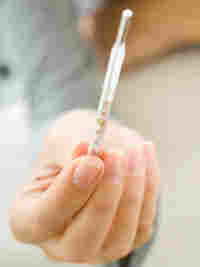 The Marist Poll is out with numbers this morning that show President Obama has a lot of work left to do if he hopes to remake the country's health-care system.

Forty-five percent of American voters disapprove of how Obama is handling health care, compared with 43 percent who give him a thumbs-up. That's a dead heat, considering the +/- 3.5 percent margin of error in the poll.

Dig a little deeper and find that the support runs high among Democrats (74 percent approval) and low among Republicans (76 percent disapproval). A problem for Obama is the majority of Independents (52 percent) disapprove of his handling of health care. (Find a table of the poll results here.

Over at FiveThirtyEight.com Thursday night, poll nerd Nate Silver wrote he's "generally feeling less optimistic about health care" after talking with some smart folks he visiting with in Pittsburgh. Congressmen, he writes, "like being popular" and "don't like getting yelled at" in town hall meetings.