Accessibility links
Some Docs Wary Of Giving HPV Vaccine To Young Girls : Shots - Health News The HPV vaccine helps guard against cervical cancer, but some docs are reluctant to give it to young girls.

Some Docs Wary Of Giving HPV Vaccine To Young Girls

Some Docs Wary Of Giving HPV Vaccine To Young Girls

Discussions about cancer, vaccines, sexually-transmitted diseases, and the best interests of pre-adolescent girls are all hot topics. Put them together, and you've got a volatile mix. 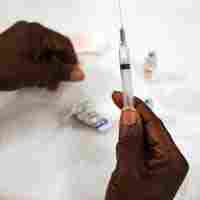 NPR's Brenda Wilson reported Monday on Morning Edition that some doctors are raising concerns about certain shots the Centers for Disease Control and Prevention wants them to give to 11-year old girls to protect against cervical cancer.

A small but vocal group of doctors have doubts about the safety and effectiveness of a fairly new vaccine developed to guard against infection of some strains of the human papillomavirus (HPV), according to a recent study of Texas doctors in Cancer Epidemiology, Biomarkers & Prevention (free abstract here) and some nationwide data.

HPV, when left unchecked, can lead to cervical cancer, so the government has embarked on a campaign to get all young girls vaccinated before they are exposed. But some doctors say they'd rather put off vaccinating girls until they are in their teens and sexually active, because it is unclear how long the vaccine's protection lasts. Others raise flags about the very small number of serious side effects parents should know about.

There are also other options, some docs note, like regular screening via Pap smears, which detect 90 percent of cervical cancers.

If you are a parent considering whether to get the vaccine for your daughter -- or someday, your son -- you'll want to check out Wilson's report.