Accessibility links
Virulent Swine Flu May Trigger Rationing Of Ventilators : Shots - Health News If H1N1 hits hard, the limited supply of ventilators in the U.S. would leave many patients in the lurch. Some controversial guidelines in the works could, for instance, allow hospitals to withhold ventilators from people with chronic illnesses so ...

If swine flu takes a turn toward the truly terrible, hospitals will be swamped and there won't be enough ventilators to help the very sick breathe. 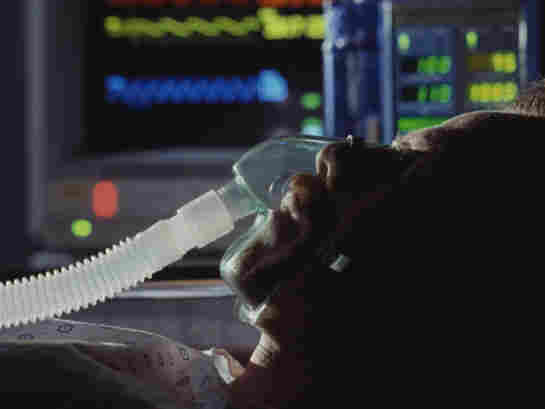 Right now, a doomsday scenario doesn't seem likely. The second wave of H1N1 looks a lot like the usual seasonal flu and not a reprise of the Spanish Flu, the 1918 pandemic that killed 50 million or more.

Still, public health officials are preparing for the worst and that means coming up with plans for who would get a ventilator and who wouldn't. Rationing of ventilators could pit the families of people with serious non-flu illnesses against those of acutely ill flu patients.

ProPublica's Sheri Fink writes about controversial guidelines in the works that could, for instance, allow hospitals to withhold ventilators from people with chronic, irreversible illnesses, such as cancer, so that flu patients would get breathing help instead.

The foundation for a lot of the thinking about ventilator rationing is the New York Protocol, drafted by New York public health officials in 2007 before swine flu was even on the map.

Under the most serious flu scenario they contemplated, more than three-quarters of a million New Yorkers would be hospitalized and 153,000 would die. During the peak of the pandemic ventilator needs would outstrip the supply by more than 15,000.

The most controversial notion would be switching ventilators from patients without flu to those acutely ill with the virus, which is summed up in the New York draft this way:

Under the worst scenario, the ventilators could be removed without the permission of patients and families.

The Institute of Medicine waded into the debate this morning with a report on how standards of care should be adjusted in the face of emergencies. In a section on ventilators, the IOM captured the ethical and legal concerns of doctors:

Many clinicians are justifiably troubled by the prospect of discontinuing life-sustaining treatment from a patient in a disaster, even though the purpose is to save lives.

The IOM says a crisis could force tough choices but that even the worst conditions don't allow doctors to act unethically. The report goes on to explore the legal ramifications and protections needed for clinicians making triage decisions during emergencies.

Some think a less-than-worst-care scenario could overwhelm ventilator and ICU capacity in the US. Last month, an analysis published online by PLoS Currents: Influenza figured if swine flu infects 46 million Americans and puts 2.7 million in the hospital, more than 330,000 folks might require ventilators, exceeding current capacity by more than 23 percent.

Recent simulations of a response to a swine flu pandemic in New York revealed problems with the triage approach, ProPublica's Fink reports. Kenneth Prager, a pulmonologist and director of clinical ethics at Columbia University Medical Center, worried about "lack of awareness" of the issues among the public and medical professionals. Societal input, he told ProPublica, "is totally absent," and that's a problem. "Maybe society will say, 'We don't agree with your plan. You may think it's ethically OK; we don't.' "