Accessibility links
Autism Strikes 1 in 100 Kids, Parents Say : Shots - Health News Recent studies show autism and related disorders may strike 1 in 100 children, more than previous research had shown. It's unclear if the apparent rise in prevalence reflects better diagnosis or an underlying increase in the problems.

How many kids have autism or related disorders? Ask parents, as federal researchers did recently, and you come up an estimate of about 1 in 100, a figure quite a bit higher than the 1-in-150 estimate from just a few years back. 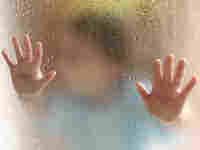 What do parents know? Well, the results from the telephone survey, published in the academic journal Pediatrics, are in line with some unpublished work by the Centers for Disease Control and Prevention that was flagged on Friday.

The prevalence of autism spectrum disorders, comprising autism, Asperger disorder and other less specific diagnoses appear to be on the rise. The Pediatrics study's estimate of the raw data boiled down to 1 in 91 kids between 3 and 17 years old, and 1 in 110 when adjusted for survey technicalities like cellphone vs. land-line use.

Some specifics: odds of autism spectrum disorder were four times greater for boys than girls. Non-Hispanic black and multiracial children had lower odds of ASD than non-Hispanic white kids. On the bright side, nearly 40% of children ever diagnosed with ASD didn't have trouble with it anymore, though it's not clear what that means exactly.

Overall, it's settled whether the apparent increase in ASD is a result of more diagnosis and reporting of problems or reflects a genuine rise in the disorders. "The concern here is that buried in these numbers is a true increase," Tom Insel, director of the National Institute of Mental Health, said Friday, according to USA Today. "We're not sure how big it is."