In the battle against obesity, doctors and patients are short on weapons. 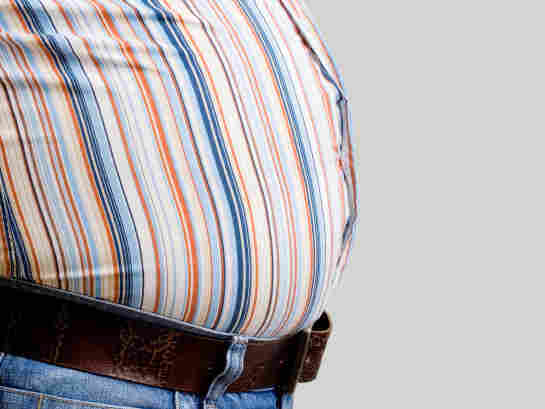 Reinforcements may be on the way for the fight against the belly bulge. iStockphoto.com hide caption

Eating better and exercising more are, of course, the best first choices for shrinking one's waistline. But often they're not enough to get the job done, and stomach-shrinking surgery remains a daunting and costly option.

Now, three small drugmakers are looking to boost the odds of success for dieters with a new crop of medicines the Food and Drug Administration could start assessing by the end of the year. If all goes well, they could be available late next year or in early 2011. But the history of weight-loss medicines is littered with failures and disappointments.

There hasn't been a new prescription-strength drug for weight loss approved by the agency in a decade. But results of large clinical tests of the new medicines show promise, though that's tempered by reports of side effects and historical safety questions.

The latest data on the medicines, presented at a scientific meeting of the Obesity Society in Washington this week, gave fresh hope to some. Just having three drugs in late-stage tests is a "big deal," said Dr. Patrick O'Neil, director of the Medical University of South Carolina's Weight Management Center. Doctors and patients need more choices, he said, and effective drugs, though not a panacea, could make it easier for patients to make changes that lead to weight loss.

What's in the works? Qnexa, a drug from Vivus, combines a stimulant called phentermine already used for weight loss with low doses of an epilepsy medicine, topiramate, which can also can lead to a drop in weight. The combination boosts the effect.

Moderate and full doses of the drug combination led about two-thirds of patients to lose 5 percent or more of their weight in a study that lasted more than a year. In that study, patients who stuck with moderate- to full-dose pills lost an average of 24 and 30 pounds, respectively, at 56 weeks.

Common side effects included dry mouth, tingling and constipation. Of more concern to some were reports of a small percentage of patients who stopped taking the medicine because of things like loss of attention and forgetfulness.

Then there's Contrave, a pill that combines two pharmaceutical warhorses--bupropion, an antidepressant and smoking-cessation aid, with naltrexone, a decades-old medicine used to fight dependence on alcohol and opioid drugs.

While that may seem like a strange brew, Dr. Dennis Kim, an exec with Orexigen, maker of the experimental combination, told us, "We put the drugs together because of advances in understanding of how the brain controls calorie intake and burn." Essentially, bupropion stimulates cells in the hypothalamus, a regulatory center in the brain, that curb appetite, and the naltrexone blocks endorphins known to be pleasure molecules.

After a year, about half the patients taking a higher-dose version of the drug lost 5 percent or more of weight, significantly more than those taking a sugar pill. Common side effects were nausea, headache and constipation.

The last of the three medicines is lorcaserin from Arena Pharmaceuticals. The medicine stimulates a receptor in the brain that curbs appetite while sparing a related receptor in the heart that was the downfall of fenfluramine, the half of the faddish diet drug combo known as "fen-phen" that led to heart valve problems.

In a study presented at the obesity meeting, nearly half of patients taking lorcaserin twice a day lost 5 percent or more of body weight, significantly more than a placebo group. Common side effects were headache, fatigue, nausea and dizziness.

Soon the FDA will get a crack at the data. The companies expect to file their applications for approval in the next few months. Past problems with diet drugs weigh on the drugmakers, particularly the fen-phen debacle and the more recent failure of rimonabant, which was to be sold as Zimulti in the U.S. The drug was linked to depression and suicidal thinking and never made it to market here.

MUSC's O'Neil says he understands the concerns about risks, especially for drugs that would likely be prescribed to millions of people. But, he argues, the medicines "should be compared to the safety profile of obesity" not some "zero-risk scenario."

More than a third of people in the U.S. are obese and about another third are overweight, the Obesity Society says. And excess weight is a significant factor in all sorts of health problems, from diabetes to heart attacks.

Correction: The initial version of this post misstated the effectiveness results for Qnexa saying that moderate doses of the drug combination led about half or more of patients to lose 5 percent or more of their weight in year-long tests, when, in fact, closer to two-thirds of patients achieved that result. Also, a weight loss of 24 pounds was the average for patients who stock with moderate doses of the drug, not something achieved by a quarter of patients.