If the 1,990-page health bill trotted out Thursday isn't hefty enough for you, just wait a little while. There's more material on the way. 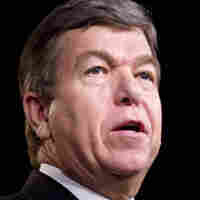 House Minority Whip Roy Blunt warns there could be surprises in an amendment to the House health bill. Brendan Smialowski/Getty Images hide caption

Up next is a "manager's amendment" from House Democratic leaders that could run 800 pages or more and contain all sorts of surprises that nobody will know about until shortly before lawmakers have to vote on it, Rep. Roy Blunt, a Missouri Republican, warned Thursday.

"This won't be the bill that comes to the floor," Blunt said at news conference where a copy of the House Democrats' plan was piled on the podium. At the session, Republicans said the measure would raise taxes, cost jobs and deepen the federal deficit, charges House Speaker Nancy Pelosi of California and her Democratic colleagues dispute.

For its part, the Congressional Budget Office figures the bill would trim the federal budget deficit by $104 billion over ten years.

House Energy and Commerce Committee Chairman Henry Waxman (D-Calif.) who helped write the House Democrats' legislation, said the manager's amendment would likely address some unresolved issues -- such as abortion -- as well as make technical corrections to the proposal but be nowhere near the scale of change that Blunt fears.

And House members, Waxman said, will have 72 hours to review the changes before a vote. "I hope he'll acknowledge his inaccuracy after he reads it," Waxman said of Blunt's charges. House Democratic leaders hope to have a vote on the measure next week.

Carey is a reporter for Kaiser Health News, a nonprofit news service.