Scientists have discovered a virus that might unlock the mystery of chronic fatigue syndrome, a debilitating illness that affects 1 million Americans. 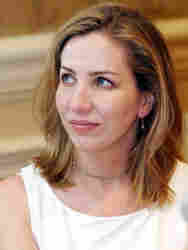 Research published today in the journal Science Express found two-thirds of patients with chronic fatigue syndrome were infected with a virus called XMRV, which copies itself into cells' genetic code. Only four percent of healthy patients tested were infected with the retrovirus. While not definitive, the findings offer a promising avenue for further research and fresh hope for patients.

We checked in with writer Laura Hillenbrand, author of the best-seller "Seabiscuit," about the news. Hillenbrand, 42, has struggled with chronic fatigue syndrome since she was 19. Her symptoms, including pain and vertigo, have been so severe that she's only left her house twice in the last two years. Here are the edited highlights of our conversation.

How does hearing about these findings make you feel?

Wow. It's wonderful news. I've had this disease for 23 years. In the first years that I had it there was virtually no research at all, and all of us have desperately needed answers for what is going on in our bodies so this is tremendous news that they've made this progress. I'm very happy to hear it.

Do you trust this finding? Or are you still skeptical?

We all need to be careful in reviewing anything that's medical that we hear about. I don't know anything about the specifics on this particular study. It's certainly encouraging to hear that there's something there. A lot of people have suspected retroviruses. My symptoms, and I think that I'm very typical, have seemed very viral: fever and sweats and chills and things that seem the way the flu seems, except much more serious and it's endless.

What do you hope this finding leads to?

There are two big things that we have needed as patients. The first is a diagnostic test. And of course if you don't know exactly what's causing the disease you can't get a definitive diagnostic test. If we could find that out, it would be wonderful. It would help a lot of people to separate this disease from a lot of other diseases, and people could get proper treatment.

And the second thing is of course treatment. It would be fantastic if all of the research efforts could be concentrated on one mechanism, instead of spread out in a million directions while everyone is trying to understand what's going on. So if it turns out that this definitely is a retrovirus, I think we would see progress very rapidly and possibly even a cure some day. That's what all of us are living for because for a lot of us it just doesn't go away.