Accessibility links
Drug Companies Hike Prices On Brand-Name Medicines : Shots - Health News An analysis for the AARP found that prices on brand-name drugs rose 9 percent in the last year, an amount estimated to add about $10 billion in costs.

When the going gets tough, the tough raise prices. 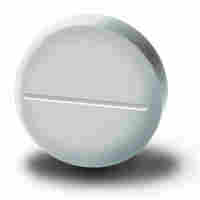 How much would you pay for this pill? iStockphoto.com hide caption

Just as the pharmaceutical industry agreed to start cutting $8 billion a year from drug costs under a health overhaul, makers of drugs raised their wholesale prices by 9 percent, a $10 billion increase in the last year, the New York Times reports.

The Times cites work by University of Minnesota pharmacist Dr. Stephen Schondelmeyer for AARP. "When we have major legislation anticipated, we see a run-up in price increases," he told the Times.

By comparison, prices of other products and services, as measured by the Consumer Price Index, fell 1.3 percent, not adjusted for seasonal variations, over the 12 months ending in September.

The increase ahead of political action is a familiar gambit in the Big Pharma playbook. As the presidential campaign heated up in 2007, the drug industry raised prices by almost 8 percent, the Wall Street Journal reported last year. Many drugmakers have also raised prices on older brand-name drugs in recent years to encourage people to switch to newer versions ahead of generic competition.

One caveat, an old adage in the drug industry is that the average wholesale price, abbreviated AWP, really stands for "ain't what's paid." Rebates and discounts offered to big buyers, such as the government and drug benefit mangers, can take a significant bite out of listed price increases. Still, the wholesale prices serve as a starting point for price negotiations.

For its part, the drug industry disputed the AARP analysis. Ken Johnson, senior vice president of the trade group the PhRMA told the Times, the AARP report was politically motivated and didn't reflect the health-care savings medicines can bring.

Update: You can read a statement by Johnson on PhRMA Web site here.

And AARP has posted the price report here.