Being sick enough to need an organ transplant is bad enough. But then there's the problem of some transplanted organs making people even sicker. 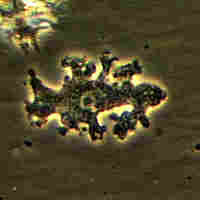 An undetected amoeba, like this one, in transplanted kidneys is thought to have have caused dangerous infections in two patients. CDC hide caption

Take, for instance, the case of two people who received kidneys from a donor in Mississippi who died after doctors diagnosed a neurological problem originally thought to have been caused by his own immune system run amok.

An investigation found the likely culprit is an amoeba, called Balamuthia mandrillaris, that lives in dirt but had infected the donor, causing his illness. Testing didn't find the amoeba before the organs were transferred.

Now, the New York Times, reports transplant officials are taking a look at policies on when to allow donations from people with neurological conditions that haven't been definitively diagnosed. The cases underscore the risk of disease from transplanted organs.

Transmission of disease by a donated organ is still, fortunately, a pretty rare event. A study published this year put the infection rate at about 1 percent, the Wall Street Journal noted in a story about the problem last week.

But the infection cases climbed to 97 in 2007 from seven in 2005, and the number of reported cases may be lower than the reality due to undereporting.

Each year some 6,000 poeple die waiting for transplants.

Even better testing and stricter standards wouldn't bring the infection risk to zero, and the persistent shortage of organs keeps demand high.

Dr. Shirley Schlessinger, medical director for the Mississippi Organ Recovery Agency, told the Times. "I think it's wrong to say we're going to eliminate all these people we can't be sure of," she said. "There will always be undetectable disease in the setting of solid organ donation."