Accessibility links
Drug Studies Lean On Flawed Measure Of Depression : Shots - Health News A common measure of depression in clinical studies may be mislabeling people as more depressed than everyday doctors would. As a result, an analysis that concludes antidepressants aren't much help for all but the most severely depressed could be m...

After all these years--and all those prescriptions--you'd think we'd know everything there is to know about how antidepressants affect the people who take them. 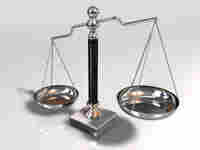 How much weight should be given to a standardized measure of depression used by academics? iStockphoto.com hide caption

But an analysis in this week's JAMA highlights a surprising weakness in our knowledge. Shockingly few of the studies on antidepressant pills published over the last thirty or so years have considered how the medications affect people with only mild or moderate symptoms.

The JAMA paper tries to do that and concludes antidepressants don't seem to work any better than a sugar pill for those with milder forms of depression. But the differences in how depression is measured in academic studies compared with how doctors assess it in the real world is another factor to bear in mind.

The JAMA paper goes on at length about something called the Hamilton Depression Rating Scale, a questionnaire most depression researchers use to decide who should get into a study. One question: "Do you have feelings of guilt?" Another: "Do you have thoughts of suicide?"

To get into a depression study you usually need to score at least 20, or be found severely depressed, according to two authors of the JAMA paper.

But there's some resistance from mental health practitioners to the Hamilton labels. They say the "severe" and "very severe" categories are misleading and don't corresponded well with how real-life doctors see their patients.

The Hamilton "concept of 'severe,' I think many psychiatrists would think of as 'moderate,' " said Dr. Mark Olfson, a professor of clinical psychiatry at Columbia University. Dr. Greg Simon from the Group Health Research in Seattle, agreed, telling me, "The Hamilton scale was made up by Max Hamilton, bless his soul, in the 1960s and everyone has used it since because it's just a tradition, but there are actually much better measures."

The problem is a kind of grade inflation. The Hamilton scale makes people appear more depressed than a clinician's usual methods of diagnosis would. "The whole thing, some people think, has been bumped up a notch or two," Olfson

So, the conclusion of the JAMA study that antidepressants work only in severly depressed people may be missing the mark. The drugs may not be so weak. Part of the problem could be an academic scale for measuring depression that pushes people with forms of the disorder that most doctors would consider to be moderate into the severe camp.