Accessibility links
Casualties And Limits Confront Navy Hospital Ship : Shots - Health News With Haitian casualties straining the capacity of the USNS Comfort, medical personnel are grappling with how to help the most people.

The doctors and nurses aboard the U.S. Navy's hospital ship Comfort have been working almost nonstop since the vessel arrived off the coast of Haiti. 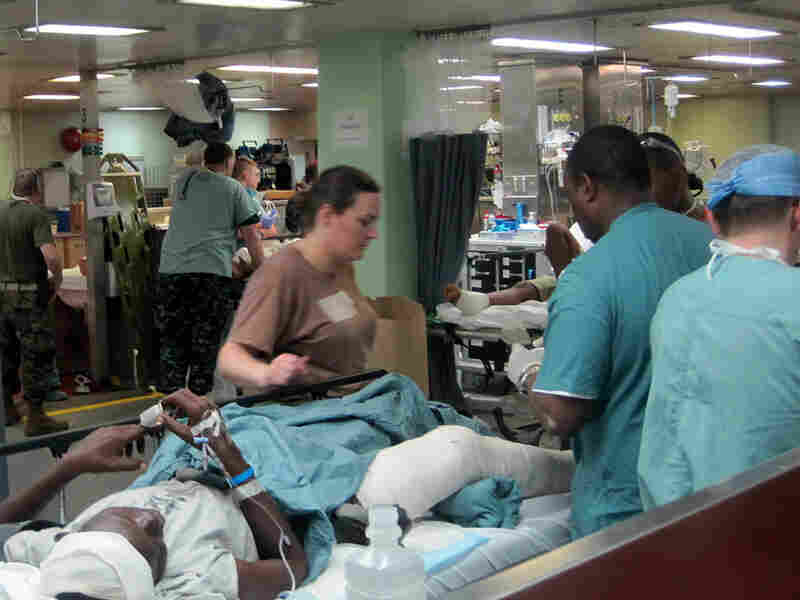 Now they're confronting the limits of how much they can help.

The patients who arrived Saturday were some of the worst the crew had yet seen. One man with a pulmonary embolism had almost died three times en route. A woman with three badly damaged limbs and failing kidneys, refused surgery, saying she would rather die than live in Haiti as an amputee. A pregnant woman with preeclampsia was going into labor seven weeks early.

Late Saturday night in the mess hall, after a busy and frustrating day, about 200 doctors and nurses gathered for a staff meeting. The workers come from preeminent medical facilities all across the United States. They're not used to the constraints of the Comfort and the aftermath of the earthquake in Haiti.

As one physician told me, back home there is essentially no end to resources, "We will drain the blood bank to save one person." But that's not an option here.

At the meeting, the health workers tried to hash out how to make the most of what they had to work with in coping with the flood of patients.

A pediatric surgeon raised a tough question about when people should be taken off equipment to help them breathe. "Today the issue was ventilators. We ran out," he said. "What do you do then? We need a reality check. Some people might have to get off the ventilator before you would take them off elsewhere. That ventilator could save the life of someone who is much more salvageable."

But other doctors appeared incensed at the idea of stopping short of using every tool available on even the chance to save a life.

One doctor suggested that the ship put people in the field to better screen patients, allowing only those aboard who had the best chances of survival. But that would also drain scarce medical resources aboard, another pointed out.

Referring to the patients likely to die, one medical planner offered a solution, "What about having palliative care facilities at the intake sites on shore?" A surgeon responded, "And have five hundred tents of dying people in a field right next to a medevac site? We can't do that."

But surely something is better than nothing. "Even if we just give them some painkillers and a comfortable bed, it'll be better than them dying in the street under the sun like a dog," a nurse offered.

But a surgeon argued that easing the death of a doomed person would take a bed that could be used for someone with a real chance of being saved. "The number of injuries is unstoppable," he said.

Over the intercom, a chaplain was called to the operating room. Two people died during the meeting.

Hundreds of thousands of Haitians were powerless against the force of tumbling buildings. And now, more than a week and a half later, 800 medical workers aboard the most advanced hospital ship in the world are finding they can't help everyone.