Accessibility links
Health Care Jobs Grew As Other Sectors Withered : Shots - Health News Today's jobs report shows resilient health businesses have added jobs throughout the recession even as virtually every other sector of the economy shed them by the thousands.

Over the past two years the health care industry has stood up to a deep economic recession, rising numbers of uninsured patients, a decline in doctors' visits, and an uncertain future obscured by Congress's ongoing overhaul debate. 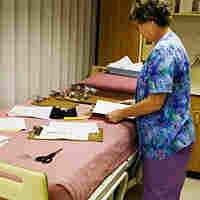 But, as today's jobs report reminds us, resilient health businesses have added jobs throughout the recession even as virtually every other sector of the economy shed them by the thousands. Since the economy tanked in December 2007, the health sector added 631,000 jobs, including 22,000 last month, according to the monthly report by the Bureau of Labor Statistics. Manufacturing companies, by contrast, dropped 2.1 million workers during those two years.

There's a simple explanation, economists say: When consumers have to choose between buying a new car and getting needed medical treatments, they go to the doctor's office, not the Ford dealership.

"It's the one area where people are not willing to make cuts," said Harry Holzer, a former Labor Department economist and Georgetown professor. An aging population has helped fortify the sector against the effects of the recession by deepening the Medicare rolls as baby boomers retire, he said.

The federal government also picked up the tab for more patients to enroll in Medicaid and began a new program to subsidize insurance for laid-off workers during the recession. A report last week from Medicare actuaries concluded that while overall health spending slowed in 2008, total federal spending grew by 10.4 percent that year, compared with only 6.6 percent in the year before the recession began.

One interesting thing to draw from the jobs report: While individual Americans are reluctant to make cuts in their health spending, no matter how rough a recession gets, health care is often the first place Congress looks for savings. For instance, 1997's Balanced Budget Act sought to take a bite out of the federal deficit by setting targets for Medicare spending on doctors' visits.

In the end, however, Congress overrode many of those budget cuts, which have been fiercely opposed both by the doctors' lobby and AARP, a lobby that includes many Medicare beneficiaries. Democrats are going back to that trough now in order to pay for their overhaul plan, to the alarm of many seniors.

One reason health care spending is always on the chopping block may be that the public makes it difficult for Congress to follow through on its cost-cutting plans, said Heidi Shierholz, a labor economist at the Economic Policy Institute.