For Kids With High Cholesterol, Change Diet, Exercise Before Drugs

For Kids With High Cholesterol, Change Diet, Exercise Before Drugs

If you had any doubt that the obesity epidemic among young people presents a real health challenge, wrap you mind around this: 20 percent of teenagers have high cholesterol. 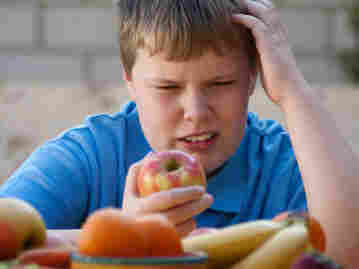 Dietary changes, such as eating more fruits and vegetables, can help many children lower their cholesterol. iStockphoto.com hide caption 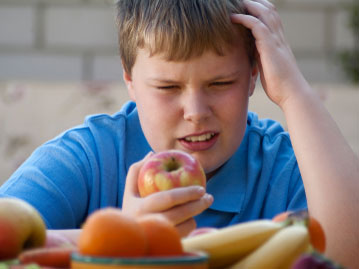 Dietary changes, such as eating more fruits and vegetables, can help many children lower their cholesterol.

Federal researchers found obese children are three times more likely to have too much fat in their blood compared with kids in their normal weight range, according to a report just out from the Centers for Disease Control and Prevention.

Earlier this week, an influential, federally sponsored group of experts recommended that kids be screened for obesity. Now, the CDC is recommending doctors consider testing overweight kids for cholesterol problems.

What should you do if one of your kids turns out to have high cholesterol, a risk for heart disease in adulthood? The CDC recommends a low-fat, high-fiber diet and more exercise. If that's not enough, then cholesterol-reducing drugs are an option.

To find out more, we talked with Dr. Julie Brothers, a pediatric cardiologist who runs the Lipid Heart Clinic at the Children's Hospital of Philadelphia. Here are edited highlights from our conversation.

Were you surprised by the report's findings?
No. Especially not the finding that the abnormal cholesterol level percentages are greater for overweight or obese kids. Almost one-half of kids who are obese have at least one abnormal lipid. That's not a surprise at all. As your weight increases your cholesterol is going to get worse--almost always.

How often do you see kids with very high lipid levels?
Well, I'm a little skewed because I have kids sent to me specifically for high cholesterol. I see them weekly. But I think there are a lot more out there who are not being tested who we don't know about.

Are treatments for children with cholesterol problems the same as those for adults?
It depends on the type of high cholesterol they have. In kids who are overweight or obese, they tend to have high triglycerides and low HDL. Those usually respond very well to dietary changes--like decreasing sugars in their diets, eating more fruits and vegetables, and increasing activity.

Most kids who are overweight don't qualify to start statin medications. That's more likely for those who have inherited cholesterol, or familial hypercholesterolemia -- only one in every 500.

What's tricky these days is that so many kids are obese or overweight, so that many with the genetic disorder are overweight too--which gives even more risk factors. But even with those kids with genetic predispositions, we do 6 to 12 months of dietary and lifestyle changes and only then do we consider drugs--and only if they're over 10. It's an age-related thing too. You don't start a 4-year-old on drugs. The guidelines say wait until at least 8 years of age, but we try not to give drugs until at least 10.

How frequently are children put on drugs for high cholesterol?
I honestly don't start drugs that often. And I frequently see children too young to start drugs. But if a child has had 6 to 12 months of therapy, and are, say, 12 years old, and their LDL level is much higher than normal, then maybe it's time for medication. But it always depends. Overall only 1 or 2 percent of my patients are on a statin. It's not a lot. We don't start medication a lot. I don't want to if I don't have to.

What kinds of side effects do these drugs have?
Studies have not shown detrimental side effect. Sometimes parents are hesitant though. And there's no emergency in these children. I just make it clear that precursors to plaque are laid down early in life, and more can get built up over years and years. But the side effects are the same as in adults--muscle aches and pains or liver abnormalities. I've never yet had a child with such problems, though we do check liver and muscle tests on a regular basis.

Do you have any other recommendations for parents?
In general, over the age of 2--eat a low fat diet. Choose skim milk instead of whole. Little changes that you can make will actually make a difference in the amount of saturated fat you are getting. Eat fiber too. Fruits and vegetables that we so often hear about are really good for you. And we want to get our kids active. That's one of the biggest issues. I mean, kids like video games, so get them to do Wii Fit instead. Kids love that in my practice. Go for family walks. Try to get them away from the TV and computer. That will help keep their weight down, their cholesterol, and will help their heart overall.