Accessibility links
Obama Treads Lightly On Health In State Of The Union : Shots - Health News The president stopped short of a prescription for getting legislation moving, and even now, after months of work, said that he was willing to reopen the discussion to accommodate better ideas.

Obama Treads Lightly On Health In State Of The Union

Obama Treads Lightly On Health In State Of The Union 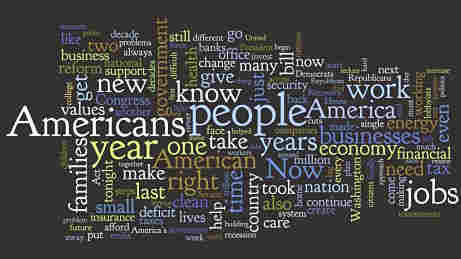 President Obama used his State of the Union address to urge lawmakers not to abandon the sinking ship of their health care overhaul bills, noting in perhaps the speech's biggest understatement that "by now it should be fairly obvious that I didn't take on health care because it was good politics."

He didn't offer a prescription on how to get legislation moving, and even now, after months of work, said that he was willing to reopen the discussion to accommodate better ideas on how to remake the nation's health system.

Want to talk about it? Join NPR's White House correspondent Scott Horsley and me for a Web chat on the president's speech and the prospects for health overhaul Thursday at 1 p.m. Eastern by clicking here.

Obama's speech came as Democrats in the House and Senate remained at loggerheads about how to proceed in the wake of last week's loss of the late Sen. Ted Kennedy's Massachusetts seat to Republican Scott Brown. That stripped Democrats of their 60th vote in the Senate and, with it, the ability to fend off GOP filibusters.

The House could pass the Senate version of the bill and President Obama could sign it. But House Democrats hate many provisions in it, starting with a controversial tax on high-cost insurance plans.

The House might be able to pass the Senate bill, Speaker Nancy Pelosi said Wednesday, if the Senate promised to pass changes under a process known as budget reconciliation. That is a fast-track procedure that bars filibusters and requires a simple majority to pass. But more than half a dozen Senate Democrats have already said they object to using reconciliation.

Enter President Obama, who urged lawmakers not to give up. "By the time I'm finished speaking tonight, more Americans will have lost their health insurance," he said. "Millions will lose it this year. Our deficit will grow. Premiums will go up. I will not walk away from these Americans, and neither should the people in this chamber." The president did not say how lawmakers should proceed, but he did appear to back away from earlier hints that Congress might want to scale back the bills.

"As temperatures cool, I want everyone to take another look at the plan we've proposed," he said. "There's a reason why many doctors, nurses, and health care experts who know our system best consider this approach a vast improvement over the status quo."

But he also left room for other possibilities, saying if anyone "has a better approach that will bring down premiums, bring down the deficit, cover the uninsured, strengthen Medicare for seniors, and stop insurance company abuses, let me know."

The White House posted health excerpts from Obama's speech here. For what it's worth, only about 6 percent of the address (about 450 words of the more than 7,000 in the speech) was devoted to health care.