Accessibility links
Kellogg Slapped For Contamination At Eggo Waffle Factory : Shots - Health News The Food and Drug Administration said sanitation problems may have contributed to contamination at a factory that makes the popular frozen waffles. Kellogg says the plant has been fixed and the products are safe. 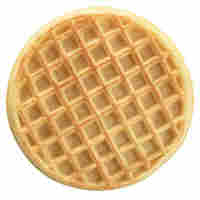 The Food and Drug Administration reprimanded Kellogg, maker of Eggo frozen waffles, in a letter that was just released. The problem: Listeria bacteria were found in Eggo Buttermilk Waffles at an Atlanta factory last October. FDA inspectors also say they found violations of quality rules at the plant.

The agency said sanitation problems may have contributed to the contamination--ranging from dirty utensils and equipment to lax employee hygiene.

Though the FDA acknowledged Kellogg made changes after the initial notice, subsequent tests came back positive for Listeria. So the agency laid down the gauntlet, telling Kellogg to "identify all areas of your facility where L. monocytogenes is able to grow and survive (niche areas) and to take such corrective actions as necessary to control the organism."

The FDA took a look at plant after an earlier warning from the Georgia Department of Agriculture.

In an e-mail to Shots, Kellogg spokeswoman Kris Charles wrote that while the FDA letter was released to the public yesterday, the situation described in the letter relates to inspections conducted four months ago, "after the plant was closed for enhanced cleaning and the flood in Atlanta that affected our facility."

You may remember that Eggo waffles were in short supply late last year, in part due to the manufacturing interruptions caused by flooding. But, according to ABCNews, inspectors had actually found Listeria in the Atlanta plant before the flood.

Back then, spokeswoman Charles told ABC that it would be at least until the middle of 2010 before grocery store freezers would be fully stocked with the waffles again. Whether the demand will still be there then is an open question.

Kellogg says the problems are solved. Charles told Shots the plant was fully tested before it reopened and that the company has taken care of the problems FDA noted in its letter. "Eggo products are safe to consume," she wrote.