Accessibility links
Judge Rules Against Patents On Human Genes : Shots - Health News A decision against Myriad Genetics, holder of patents on gene tests for breast and ovarian cancer, could challenge the validity of thousands of patents on human genes.

In a decision that shakes the legal foundation for much of the biotech industry, a federal judge has ruled many of a Utah company's patents on a gene test for breast and ovarian cancer are invalid. 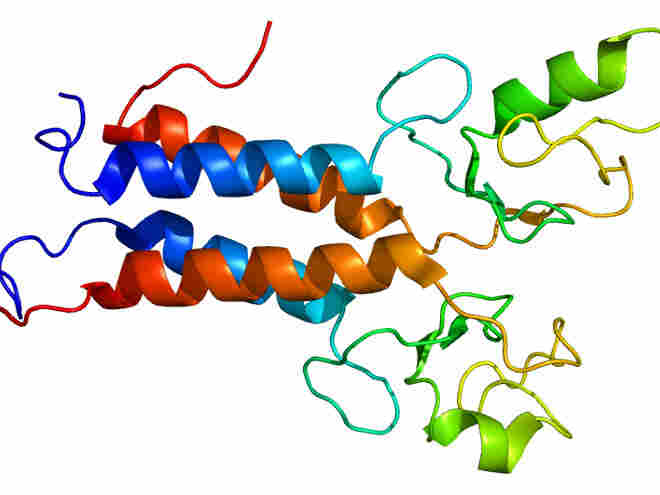 The protein made by the BRCA-1 gene. Wikimedia Commons hide caption 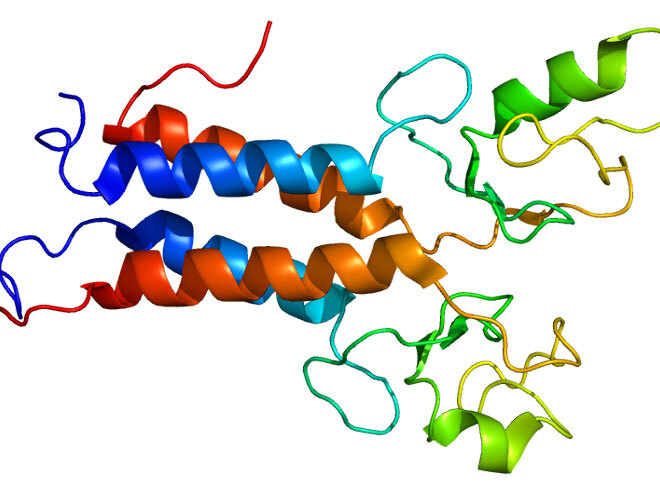 The protein made by the BRCA-1 gene.

The case involves patents on two genes, called BRCA-1 and BRCA-2, that are responsible for about 10 percent of breast cancer and ovarian cancer.

Women who want to learn if they carry variants of the genes linked to cancer have to get a $3,000 test from Myriad Genetics, which was a defendant in the suit.

Judge Robert Sweet in the Southern District of New York has invalidated some of Myriad's patents. He says the BRCA genes are "products of nature" in a 156-page opinion you can read here, so, essentially, the company can't own patents on them.

Putting a point on things, Judge Sweet, as the New York Times notes, took up the argument of critics who say identifying and isolating a gene is enough to win a patent. That's too clever by half, according to Sweet, and constitutes, "a 'lawyer's trick' that circumvents the prohibition on the direct patenting of the DNA in our bodies but which, in practice, reaches the same result."

If the judge's legal logic holds up, it could imperil thousands of patents. But this case is only the beginning of the legal wrangling. "Despite the complete victory for the plaintiffs, we have to keep in mind that this is just the first step on a long road for this particular piece of litigation, and for the future of gene patents more broadly," wrote biotech attorney Dan Vorhaus on the blog Genomics Law Report.

The suit was brought by the American Civil Liberties Union and the Public Patent Foundation. "The court correctly saw that companies should not be able to own the rights to a piece of the human genome," Daniel B. Ravicher, a lawyer with the Public Patent Foundation, said in a statement. "No one invented genes. Inventions are specific tests or drugs, which can be patented, but genes are not inventions."

In a statement, Myriad said it would appeal the ruling and is confident it will be reversed. The company also said it didn't expect the ruling to hurt its business because many patents on the tests are unaffected.