Accessibility links
Doctors Often Order Heart Test But No Disease Is Found : Shots - Health News Most patients without known heart disease who get coronary angiograms don't have clogged arteries after all, a large study finds. The results cast doubt on the usefulness of the expensive test in about 200,000 cases a year.

Doctors Often Order Heart Test But No Disease Is Found

Doctors Often Order Heart Test But No Disease Is Found

The gold-standard test for heart disease is looking a little tarnished. 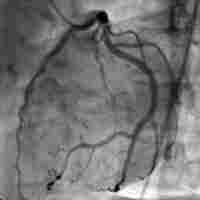 Angiograms may be used too often. Wikimedia Commons hide caption

A big study says most patients without known heart disease who undergo coronary angiography don't have clogged arteries after all.

In such patients angiograms reveal coronary disease only 40 percent of the time. Worse yet, another 40 percent have essentially clear coronaries.

The upshot? Medicine's definitive test for diagnosing heart disease doesn't do a very good job in about 200,000 Americans who get it every year--at about $2,500 a pop. The results suggest the test may be used too often.

To do an angiogram, or cardiac catheterization, doctors thread a thin tube from the groin up into the coronary arteries. Injecting a dye shows on x-rays whether arteries are gunked-up or clear.

More than a million Americans get angiograms every year. One in five angiograms involves a patient without known heart disease--and often no symptoms.

The new data come from the biggest study of the question so far--encompassing 400,000 patients with unknown coronary-artery status prior to their angiograms. It draws from a database of the American College of Cardiology, which funded the project. The findings were published in the current New England Journal of Medicine.

Duke cardiologist Dr. Manesh Patel, who led the study, says the researchers were "taken aback by the fact that there's an equal percentage of angiogram patients with little or no coronary disease and those with severe disease."

They were also struck by the fact that 83 percent of the angiogram patients had noninvasive "gatekeeper" tests that were positive, suggesting that an angiogram would be likely to find heart disease. Even so, most of the time they didn't. These tests include exercise stress tests, ECGs, echocardiography and scintigraphy, a test that involves injection of a radioactive dye to tell how well the heart's blood supply is functioning.

That leaves doctors with no reliable way to tell in advance which patients without known heart disease really need angiograms. Nobody expects angiography to be perfect--finding heart disease only when it's present, and never when it's not.

But Patel says researchers urgently need to figure out which noninvasive tests--and what other markers, such as family history and diseases like diabetes--are most important to increase the "yield" of angiograms.

Not only are angiograms expensive, but they expose patients to the risk of radiation and rare but sometimes serious side effects.

Patel thinks that "the entire diagnostic process from start to finish needs reevaluation -- from talking to patients to the threshold for going invasive," meaning angiography.

The best place to start, he says, is with patients without symptoms of heart disease, such as chest pain. Almost 1 in 3 Americans who get angiograms today are symptom-free. Their doctors order angiograms presumably because they suspect "silent" heart disease, perhaps because a patient has a family history of coronary disease, diabetes or other risk factors.

But angioplasty and stenting--procedures commonly done during angiography to widen clogged coronaries and keep them open--have never been shown to lengthen life, Patel says. The reason for doing them is to relieve symptoms. And if a patient doesn't have symptoms, then doctors and patients should ask themselves what's the point of doing the angiogram -- instead of reducing coronary disease risk factors.