Accessibility links
Pepsi To Restrict Caloric Drinks In Schools Worldwide : Shots - Health News Before long, kids in schools around the world won't see as many caloric drinks from PepsiCo. The beverage giant will pull back on the sale of sugary soft drinks overseas, as it has already in the U.S.

Only a week after a report showed a dramatic drop in the sale of sugary drinks in U.S. schools, Pepsi said it will pull its full-calorie, soft drinks from schools around the world. 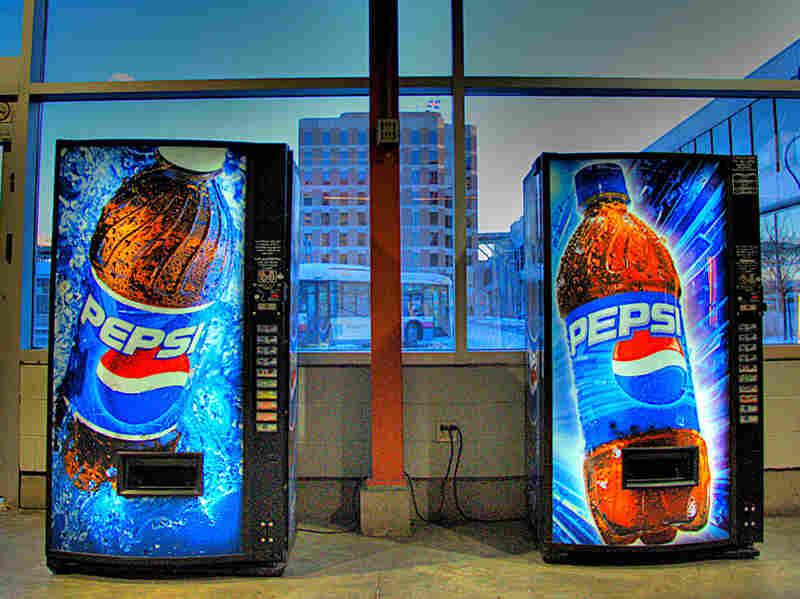 Machines like these will no longer vend full-calorie Pepsi in schools worldwide. mike9alive/Flickr hide caption 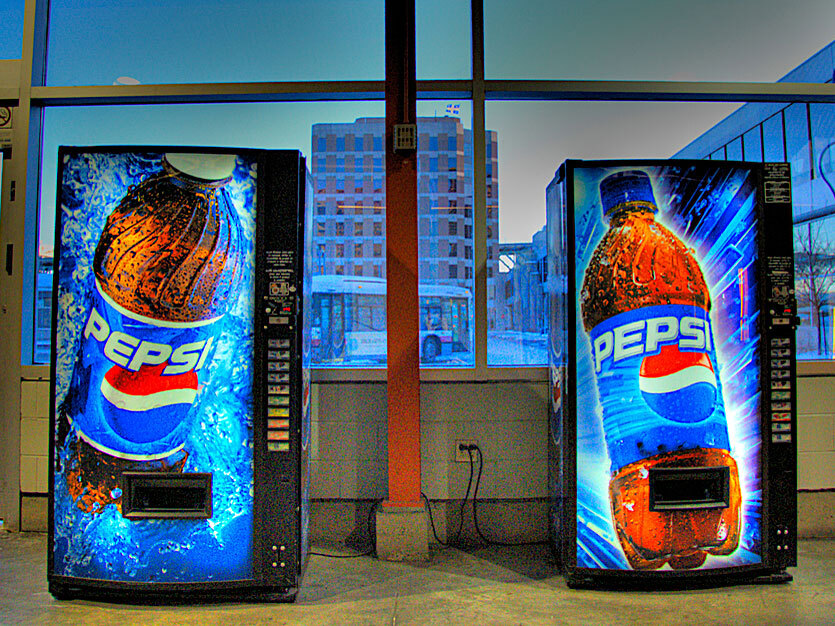 Machines like these will no longer vend full-calorie Pepsi in schools worldwide.

The company would stop sales of such beverages to primary and secondary schools by 2012.

Derek Yach, senior vice president of global health policy for PepsiCo., says the company would withdraw "full-calorie beverages" from all schools. Schools for younger kids would get only bottled water, juices in certain portion sizes, and low-fat or skim milk. Schools for older kids could still get diet sodas. All energy drinks would also be banned, and Gatorade would be available only "when physical activity is carried out -- in special relation to sports, not for everyday use," he said.

In the U.S., attention has been shifting to healthier eating over the past years--especially for children. And, now, first lady Michelle Obama's anti-childhood obesity initiative is pushing for even more change in the way children eat. But Yach says Pepsi gets it that "there is a demand from parents around the world for healthier options in schools -- from Mexico, to India, to Japan."

Back in 2006 both Pepsi and Coca-Cola adopted guidelines for drinks that would be allowed U.S. schools. And that policy has turned out to be pretty successful -- according to the American Beverage Association, there has been an 88 percent drop in the total calories contained in beverages shipped to schools. And, Pepsi's new global policy resembles the U.S. model.

Yach told Shots that removing less-healthy options from schools has had a big effect on children's calorie intake. "And that made us ask, if we could have such an impact in the U.S., could it do the same globally?" he said.

A global policy on soft drink sales in schools has been in the works since 2007, according to Bruce Silverglade, legal affairs director for the Center for Science in the Public Interest. That's when soft drink companies began working with the World Heart Association and other international health groups to address children's nutrition worldwide.

"Our original goal was to get both Coke and Pepsi and the smaller soft drink companies to sign on to a standard, uniform policy that would remove carbonated soft drinks and sugary beverages from all schools - -primary and secondary," Silverglade told Shots. "And that didn't quite happen. The industry couldn't agree with itself."

But, the PepsiCo announcement comes very close to the statement of principles CSPI had hoped the whole industry would agree to. "And it's significant because Pepsi is the first international food company to announce specific nutritional guidelines for one of its major product lines. Others claim they have one, but Pepsi is t he first one to put some teeth on it," by actually signing on to strict guidelines, he said.

Coca-Cola Co. had actually announced its own standards just last week. And company spokeswoman, April Jordin, senior manager of global public affairs & communications, told Shots that the company have had separate, more rigorous guidelines for the US, Canada, Australia and Europe in place for some time now.

But its new global policy isn't as wide-reaching as Pepsi's. In the policy document, Coca-Cola said that none of its products would not be offered in primary schools, but this would not extend to secondary schools.

"I think the approaches of the two companies show a difference in marketing strategy and how to deal with public pressure and public concern over obesity," Silverglade said.

But, we had to know: would Coke try to outdo Pepsi now that it has raised the bar? According to Jordin, it's unlikely. She says that Coca-Cola has been working on their guidelines for months now and "what we've got makes sense for us, so we're not going to react to Pepsi and just put something else out."