When people inherit a common variant of a gene called FTO, they tend to put on a few extra pounds and are at higher risk of becoming obese. 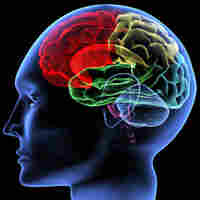 A genetic double-whammy could raise your risk for obesity and losing mental function as you age. iStockphoto.com hide caption

That's the bad news scientists already knew. What they didn't know, until now, is that people with this version of the gene also tend to lose more brain tissue as they age.

That's the bad news from a new study published in the Proceedings of the National Academy of Sciences.

The study, led by researchers at UCLA, looked at brain scans of more than 200 healthy people older than 55.

The finding is disturbing, says Paul Thompson, because "any loss of brain tissue puts you at greater risk for functional decline."

Nearly half of all people in the U.S. with ancestors from Europe carry the gene variant. It's less common in African Americans, Asian Americans and U.S. Hispanics.

But even people who have the FTO variant can blunt its effects by exercising and watching their weight, Thompson says.He says people in the study who carried the gene but stayed slim did not appear to lose brain tissue.