Accessibility links
The Nutritional Lowdown On KFC's Double Down : Shots - Health News At 540 calories, KFC's breadless Double Down is a little lighter than a fried chicken club sandwich from McDonald's. But don't mistake either one for health food.

The Nutritional Lowdown On KFC's Double Down

The countdown to the release of KFC's Double Down has come to an end. And we just couldn't resist checking out the new breadless "sandwich."

But, for the sake of some objectivity and because we vegetarians needed a carnivore to do the actual tasting, we grabbed NPR news intern Rachel Lushinsky, an avowed fried chicken lover, for the test. Watch the slideshow documenting our experiment: 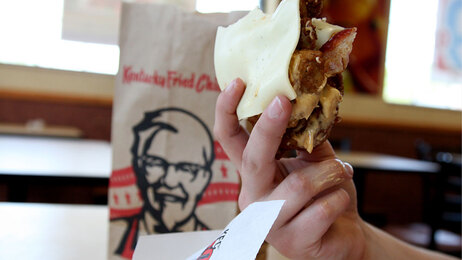 Opening Up The Double Down

After taking her first bite, Rachel needs a minute to clear her throat and gather her thoughts: "I mean, not good. The cheese is just freaking me out." We see her point.

The folks at the KFC we visited seem to have made a mistake -- the cheese was on the outside, definitely not something we saw in any of the promo pictures. Even so, Rachel says this only made the DD a little more awkward to handle. "There's nothing holding this together! This is not a sandwich," she says.

As for the taste, she says: "There is way too much going on in this thing. I like salty, but this is just too salty." And the sodium content is high -- a whopping 1,380 milligrams -- more than a half-teaspoon's worth of salt. For comparison's sake, the American Heart Association recommends people eat less than 1,500 mg of sodium in an entire day.

Considering the rising consciousness on healthy eating -- from rules that will require calorie counts on menus nationwide to Jamie Oliver teaching kids in West Virginia to make better food choices -- it was pretty gutsy of KFC to market a product that sandwiches bacon and mayo-based sauce between two pieces of fried chicken.

Still, KFC's new creation might surprise you a little on the nutritional front. At 540 calories, the Double Down, though not exactly a dieting food, is 90 calories lighter than McDonald's Premium Crispy Chicken Club Sandwich.

Still, Rachel says it feels much heavier. "I'm already full by bite two," she groans. "I'm definitely going to need a workout tonight if I finish this!"

Overall, we have to admit it's something that KFC has whipped up so much buzz simply by cutting out the bread from a chicken sandwich. Rachel isn't ready to give up on tradition just yet: "I'm not sure this is going to reinvent the Big Mac."

For another take on the Double Down, our colleagues over at the Wait Wait Don't Blog Me put together a veritable focus group and live-blogged their taste test here.