Accessibility links
Mom's Voice Packs Soothing Power : Shots - Health News Scientists find that a mother's words can reduce a child's stress as much as a hug.

A mother's whispers of comfort to her child can be as healing as a hug. 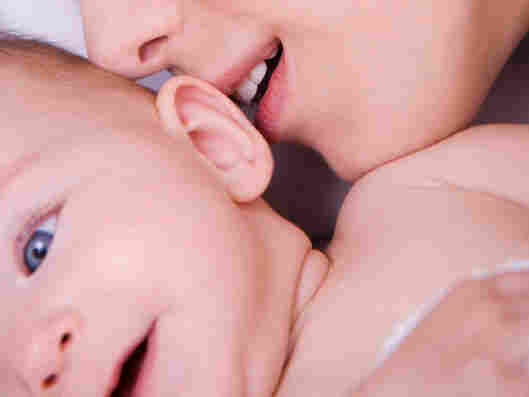 What mom has to say may relax you. iStockphoto.com hide caption

This hormone helps regulate all sort of biological and social processes in the body, including feelings of attachment between mothers and their young, as well as the suppression of stress.

The study, published online by the Proceedings of the Royal Society B (B for Biology), involved 61 mothers and their daughters who were between 7 and 12 years old. The children were asked to take part in a particularly stressful activity. They spoke in public and performed math tasks in front of an audience. Stress levels were measured by assessing certain chemicals in their saliva.

As suspected, researchers were able to measure higher levels of stress chemicals among children who had no maternal contact. Those children who had physical or vocal interaction with their mothers experienced the same amount of stress reduction as did those who received vocal comfort alone.

The scientists conclude that speech may be just as important as touch in the  development of important social bonds. But you and your Mom probably knew that already.