Accessibility links
Polio Outbreaks Down But Still Not Wiped Out : Shots - Health News The CDC reports that polio has almost disappeared, but a few thousand cases persist worldwide. Because the virus only lives in the human body, it's one public health officials say we should be able to eradicate.

Polio Outbreaks Down But Still Not Wiped Out

Polio Outbreaks Down But Still Not Wiped Out 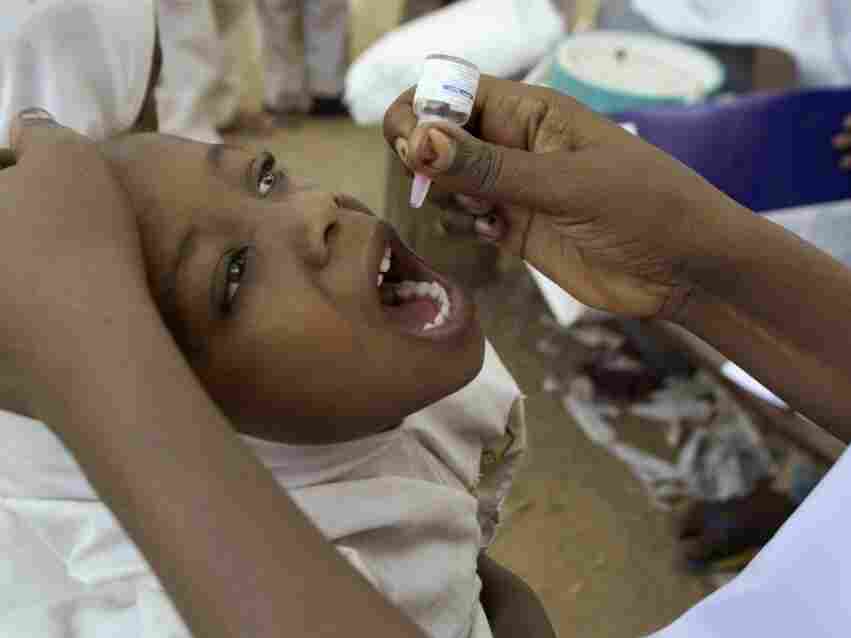 Polio had a resurgence in Nigeria several years ago after some local leaders spread false rumors that the vaccine wasn't safe.  Things are getting better, though, last year the incidence in Nigeria dropped by half. Sunday Alamba/AP hide caption

The Centers for Disease Control and Prevention reports that polio has almost disappeared, but a few thousand cases continue to plague health officials worldwide.

The CDC has compiled the latest figures on polio infections. In 2009, there were 1,606 confirmed cases worldwide. That's only down 45 cases from the year before.

On paper, polio looks like a disease that should have disappeared a long time ago. The virus doesn't hide in nature anywhere other than the human body. There are effective vaccines. And there have been enormous efforts by governments and their NGO partners.

Polio was supposed to be gone by the year 2000. But the polio virus, which can cause full or partial paralysis, keeps coming back. There was just an outbreak in Tajikistan, and an aggressive new approach to eradication is scheduled to be discussed next week at the annual meeting of the World Health Organization.

Running a successful vaccination campaign can be incredibly difficult. If paralyzed kids aren't visable, parents don't see the need to have their own children vaccinated.

And, there's the fear factor.

Take Nigeria. Several years ago, local leaders in the northern part of the country spread false rumors about the safety of the vaccine. People stopped getting their children vaccinated -- and polio, which had been nearly eradicated, came roaring back. The new numbers published by the CDC show things are getting better in Nigeria, the incidence dropped by half last year.

But the Nigerian virus has had a chance to spread to other African nations, and last year there were polio outbreaks in 19 previously unaffected countries.

Fear also played a role in what happened a few years back in Indonesia. I travelled there to look into polio eradication. I went to a vaccination campaign in one village. Health workers were delivering oral vaccine to infants and children at a meeting hall. And there was a woman standing out front, corralling parents, showing them her partly paralyzed baby girl.

The baby's legs went limp a day after vaccination. The woman blamed the vaccine. But the vaccinators knew the truth -- that the child had already been infected when she got the vaccine. But still, many of the parents took their children away, unvaccinated.