Accessibility links
Ebola Vaccine Works Against New Virus : Shots - Health News An experimental Ebola vaccine works against a recently discovered species of the virus found in Uganda. In a surprise, the protection occurs without antibodies.

Experimental vaccines against an Ebola virus like this one may also work against a virus variety found in Uganda. Cynthia Goldsmith/CDC hide caption 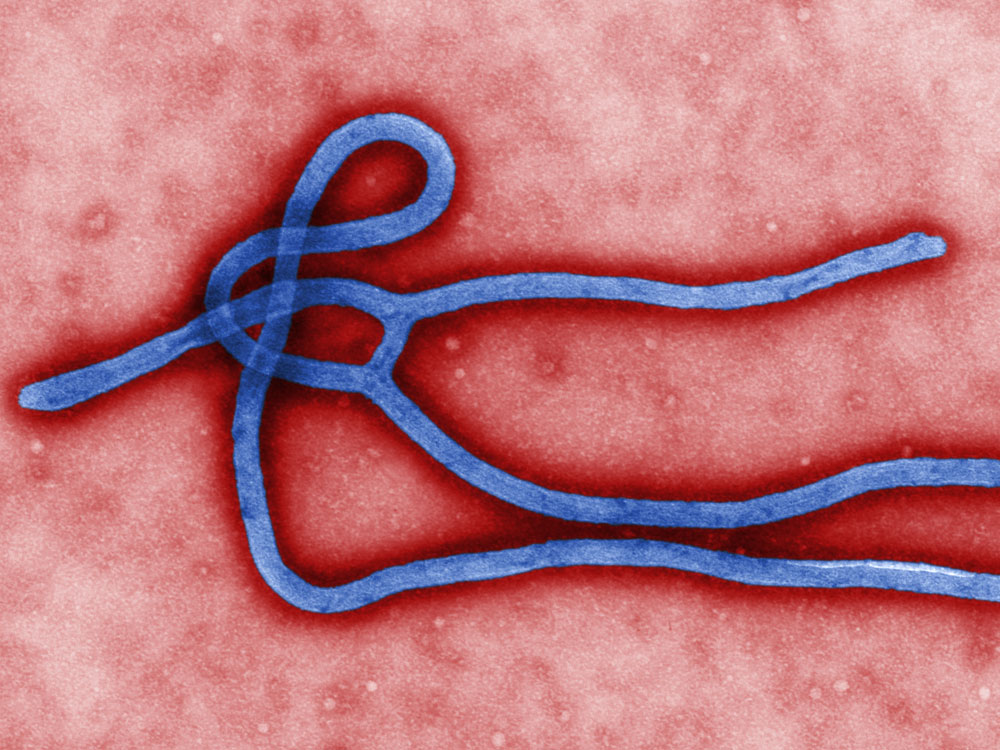 Experimental vaccines against an Ebola virus like this one may also work against a virus variety found in Uganda.

No virus is more feared than Ebola. So scientists were alarmed when a new species of Ebola emerged in Uganda in 2007.

They worried that the Bundibugyo ebolavirus, as it's called after the township in western Uganda where it was discovered, wouldn't be thwarted by the promising experimental vaccines already being developed against other lethal Ebola species.

Scientists can't just keep adding new viral species or strains to vaccines. "Generally the more strains you put into a vaccine, the less likely it will work," says vaccine researcher Nancy Sullivan of the National Institute of Allergy and Infectious Diseases.

But Sullivan and her colleagues have good news. They found that a current experimental vaccine totally protected monkeys against the Bundibugyo bug -- even though the new virus wasn't included in the vaccine recipe. Their results appear in the online journal PLoS/Pathogens.

Importantly, the vaccine did the trick without stimulating any antibodies against the Bundibugyo virus. Protection depended entirely on the other arm of the immune system, called cellular immunity.

"The dogma is that viruses require an antibody response to prevent the virus from entering the cell," Sullivan says. "This is truly the first time that cell-mediated immunity alone has been shown to be protective against virus infection."

The vaccine specifically protects against the Zaire and Sudan species of Ebola. Both are very different from the new Bundibugyo virus – as much as 43 percent different, in terms of genetic sequences.

The vaccine contains pieces of the protein-sugar coat (glycoprotein) from the Zaire and Sudan viruses, inserted into a type of common cold virus. The cold virus carries the Ebola glycoprotein into cells of the vaccine recipients – in this case four macaques in a maximum-security lab at the U.S. Army Medical Research Institute for Infectious Diseases, or USAMRIID, at Fort Detrick, Maryland. Once infected, the monkeys' immune cells chop the Ebola glycoprotein into small pieces and display them on their surface, where they stimulate a response from other immune cells.

The monkeys got four "priming" shots, followed a year later with a booster shot.

Four other macaques got no vaccine. All eight animals were inoculated with ordinarily lethal doses of the new Ebola virus. The vaccinated animals all survived, and the unvaccinated monkeys all died.

The researchers will use the new results to "optimize" a vaccine that might eventually be approved for human use. To do that, they'll have to show it works in larger animal studies.

There's no way to do trials of Ebola vaccines in humans. Unlike, say, a vaccine for HIV, there's no identifiable group of people at risk for Ebola, which tends to pop up unexpectedly when conditions are ripe for the virus to jump from its unknown reservoir – possibly in fruit bats – to nonhuman primates and then humans.

The Food and Drug Administration has already agreed to accept animal evidence of efficacy for an Ebola vaccine. But to get to that stage, the experimental vaccine needs more support. It could come from a commercial sponsor, the Defense Department or the NIH, but so far that hasn't happened.

And who would get an Ebola vaccine once it's approved?

"You would target health care workers and others at risk of being exposed," Sullivan says. "The military in the US and Africa would be another candidate. When there's an Ebola outbreak, everyone scatters. If the military were vaccinated and weren't afraid of infection, they might be better at protecting the borders."

And in the event of an Ebola outbreak – whether an indigenous epidemic in Africa or as the result of a bioterrorist plot – public health officials would probably use "ring vaccination." That is, everyone around the first victims – family members, health care workers, and possibly everyone in a circumscribed geographic area – would get access to the Ebola vaccine.