Accessibility links
FDA Warns About Bone Breaks And Heartburn Drugs : Shots - Health News Popular drugs like Nexium and Prilosec will now carry warnings about risks for bone fractures that may be linked to long-term or heavy use.

If you take the most popular kind of stomach-acid drug, you might be raising your risk of a broken bone. 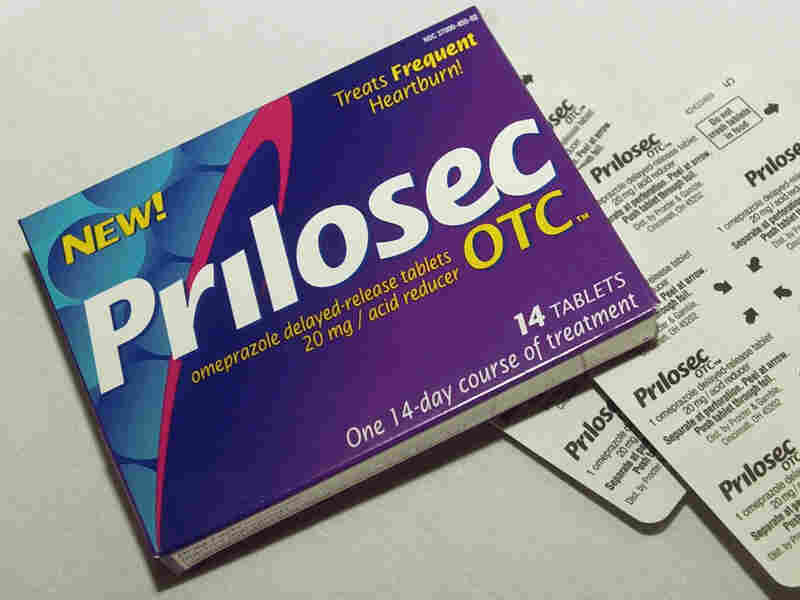 It may be time to rethink drugs like Prilosec for mild heartburn. AP hide caption

The Food and Drug Administration warns that people who take drugs called proton pump inhibitors, such as Nexium, for more than a year or use high doses have higher rates of hip, wrist and spine fractures. Non-prescription medicines in the class include Prilosec OTC and Prevacid. Now all the medicines will carry a warning about fracture risks.

PPIs are among the most popular of all drugs. About one in 20 Americans takes them -– because they're so effective at reducing stomach acid, typically to less than 10 percent of normal levels.

The FDA's action rests on seven studies over the past decade. They included nearly 200,000 PPI users who had fractures and 700,000 users who didn't. Six of the studies showed an increased risk of fractures, and some showed the risk was greater among people who used higher doses or took the drugs longer. Most of the studies involved PPI users over 50, when the risk of brittle bones is higher.

A bunch of recently published studies highlighted a variety of underappreciated risks from the drugs. One large Canadian study found the risk of hip fracture was nearly five times higher among PPI users who'd been taking the pills for seven years or more.

The new FDA-mandated labels will advise consumers and doctors that PPI users should take the drugs for no more than 14 days, and to limit their use to three 14-day courses a year. That's very different from the way many people use PPIs.

Many of these users have diagnoses of GERD (gastroesophageal reflux disease)  , stomach or small-intestine ulcers, or inflammation of the esophagus. But it's probably a good guess that most PPI users have ordinary heartburn that would respond well to antacids tablets, other acid-reducing drugs or measures such as dietary change -- or simply extra pillows to elevate the head during sleep.

But PPI users shouldn't just stop taking the drugs suddenly. For one thing, there's evidence that people who've been on the drugs for awhile can get a sudden, fierce return of their stomach-acid symptoms when they stop. If you're one of these people, it might be necessary to wean yourself off PPIs gradually, substituting other acid-reducing drugs called H2 blockers, like Zantac.

The FDA says it's not certain that PPIs actually cause fractures, or if they do, how. The studies indicating a higher risk of fractures were all observational – they compared fracture rates among users and non-users. Previous controlled trials did not show a fracture risk, but that may be because they were too small and too short.

The FDA plans to analyze data from several large controlled studies of osteoporosis dugs called bisphosphonates to see if fractures were more common among women in the study who used PPIs. It has also asked the makers of Dexilant, which was approved last year, to conduct a post-marketing study of bone formation and loss among people taking the drug.

Meanwhile, the FDA urges PPI users to report any side effects to its MedWatch program. That helps the agency track problems with drugs that emerge only when millions of people start taking them.