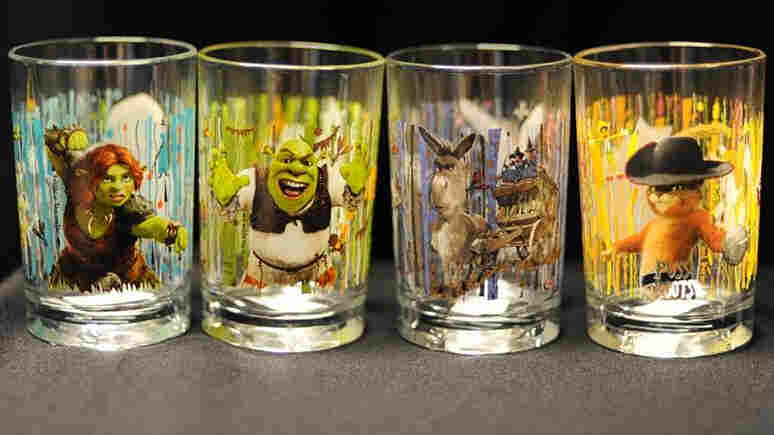 12 million of these glasses are being recalled by McDonald's because of risks from cadmium, a toxic metal, found in tests. Consumer Products Safety Commission hide caption

How did the Consumer Products Safety Commission find out that cadmium, a toxic metal, was present on millions of Shrek drinking glasses now being recalled by McDonald's?

Well, an anonymous person with access to some pretty slick testing equipment tipped off Rep. Jackie Speier (D-CA) about the problem.

Her office confirmed that somebody using a Thermo Scientific Niton XRF testing gun found a lot of cadmium, sometimes used in yellow pigments, on the surface of the glasses. The source overnighted glasses to Speier's office last week, which then turned over the test results and specimens to the CPSC.

The CPSC was nice enough to acknowledge Speier's help in a footnote to the release about the burger chain's recall of the Shrek Forever After glasses being sold at its U.S restaurants.

By law, no more than 75 parts per million of cadmium is supposed to be present in paint on kids toys. Speier's office said the amount found on the glasses was quite a bit higher than that. She's pushing legislation that would apply the toy standard to all sorts of products used by kids.

She also wants heavy metals, including cadmium, banned from children's jewelry. The cadmium levels on the glasses, by the way, was less than those found in children's jewelry that was previously recalled, the CPSC said.

The CPSC confirmed the results passed along by Speier and then told McDonald's about the findings. The burger chain is recalling all 12 million of the glasses as a "precautionary measure" and told consumers not to use them anymore. Refund information will be available starting June 8.

McDonald's said a third-party lab found the glasses to comply "with all applicable federal and state requirements at the time of manufacture and distribution." But the company acknowledged CPSC's views on what level of cadmium is acceptable are in flux, so McDonald's pulled the glasses out of an "abundance of caution."

What, you might ask, is this XRF stuff anyway? Well, it stands for X-ray fluorescence. The tipster "fired" a beam of X-rays from a testing gun at the glasses. That beam caused the cadmium to glow with a characteristic wavelength of light that identified the metal and how much was present.

Turns out the CPSC uses just these sorts of guns, too, when testing products in the field for lead and other toxic metals. (If you're really, really interested in that, see this video press release from CPSC.) And the gizmos even have their own blog here.

Finally, heavy metals, including cadmium, are also showing up in drinks that are supposed to be good for you. Earlier this week, we wrote about metals in protein drinks popular with people trying to bulk up their muscles.

Update: We just found some more details about the cadmium testing from The Smart Mama blog run by Jennifer Taggart. She was one of the people who submitted testing data to the CPSC, she says in this post. She got several readings of more than 1,000 ppm cadmium on her XRF gun.

Second update: Taggart confirmed in an e-mail to Shots that she was one of two tipsters. The other one, she said, wishes to remain anonymous.