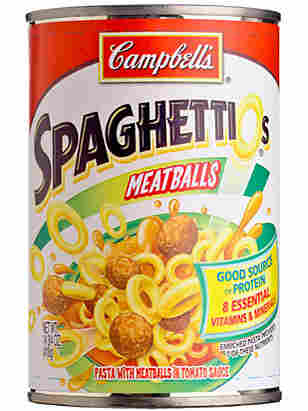 Watch out for SpaghettiOs like these. USDA hide caption

Two popular foods with household names associated with family mealtime and wholesomeness -- SpaghettiOs and Marie Callender -- are being recalled because they might make you sick.

Fifteen million pounds of SpaghettiOs, the canned, ring-shaped noodles in tomato-cheese sauce I begged for in my childhood, may have been "under-processed," according to the Agriculture Department, which announced the recall late last night.

Campbell's Soup Supply Co., which makes SpaghettiOs, says it found potential problems during a routine inspection, but no one has reported illnesses.

An investigation by the Centers for Disease Control and Prevention of salmonella cases in 14 states found that people sickened by a particular salmonella strain had eaten the Marie Callender foods in April and May. The last report of illness was May 22, the USDA says.

The agency is advising customers to throw the products away and report any illness.