Accessibility links
Baby Crabs In Gulf Spill Zone Tainted By Oil : Shots - Health News Telltale golden drops of oil were found beneath the shells of post-larval blue crabs off the coast of Mississippi. 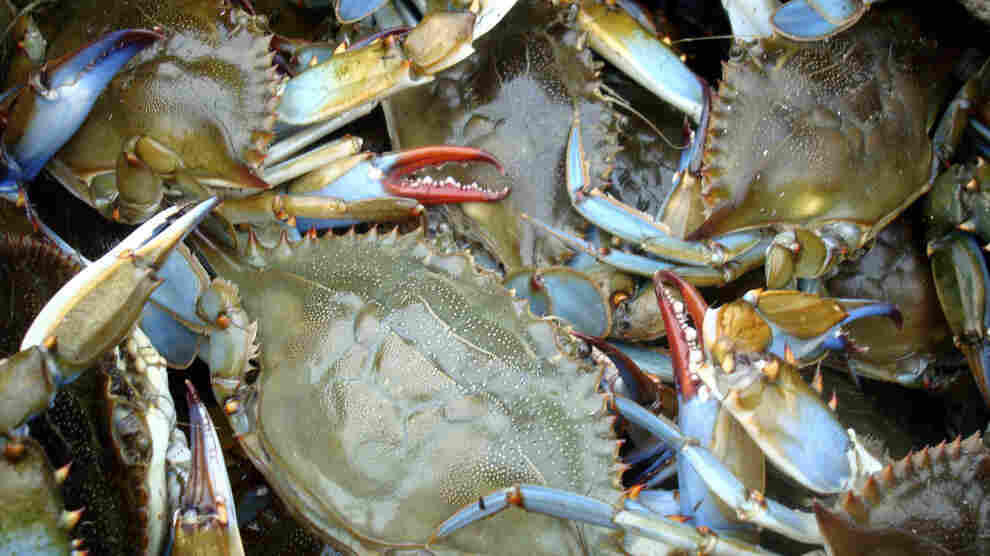 Baby blue crabs found with oil droplets under their shells might not grow up to be like these guys. Vicky Smith/AP hide caption

The government says oil from the Gulf of Mexico has not slipped into the human seafood supply, but scientists conducting a routine study of blue crabs in a Mississippi coastal marsh impacted by the spill found a pretty good example of what it might look like.

Researchers from the University of Southern Mississippi found little globs of golden oil underneath the shells of barely hatched blue crabs in Davis Bayou in Ocean Springs, near Biloxi.

"In all the years we've collected, I've never seen anything llike that," Harriet Perry, director of the university's Gulf Coast fisheries research lab, told the Mississippi Press. The critters likely ingested oil while feeding on bacteria and plankton.

This discovery may be critical because these baby crabs, and possibly the oil they're carrying, can be eaten by roving fish and shore birds.

But then again, the crabs could shed the oil in the molting process, Perry said, or they could die from the oil exposure without being eaten. More research is needed.

Meanwhile, NOAA and the FDA are working with state governments to keep areas of the Gulf closed that have been exposed to oil, conductregular testing, and work with seafood processors.

"At this time, NOAA has not seen and the chemical tests performed on fish samples from federal waters have not revealed any elevated polycyclic aromatic hydrocarbons (PAHs)," Monica Allen, a NOAA spokeswoman told us.

So far, about one-third of the federally controlled waters in the Gulf are closed to fishing. Check the map here.

But Marianne Cufone of Food & Water Watch, a seafood safety watchdog group, warned Shots that the discovery of oil in the baby crabs is just the beginning.

"The Gulf produces 1.3 billion pounds of seafood annually."If oil gets into the food supply through the oyster, crab or shrimp harvest, "this could absolutely devastate the region," she said.

Seventy percent of the domestic shrimp we eat in the U.S. is from the Gulf, she said. This spill may drive consumers towards more imports, which have had their own problems in recent years.

So what should be done?