Accessibility links
FDA Panel Mulls Restrictions On Menthol In Cigarettes : Shots - Health News The cooling sensation of menthol may help young people pick up the smoking habit. Now a panel of experts is looking at whether the FDA should restrict the ingredient. 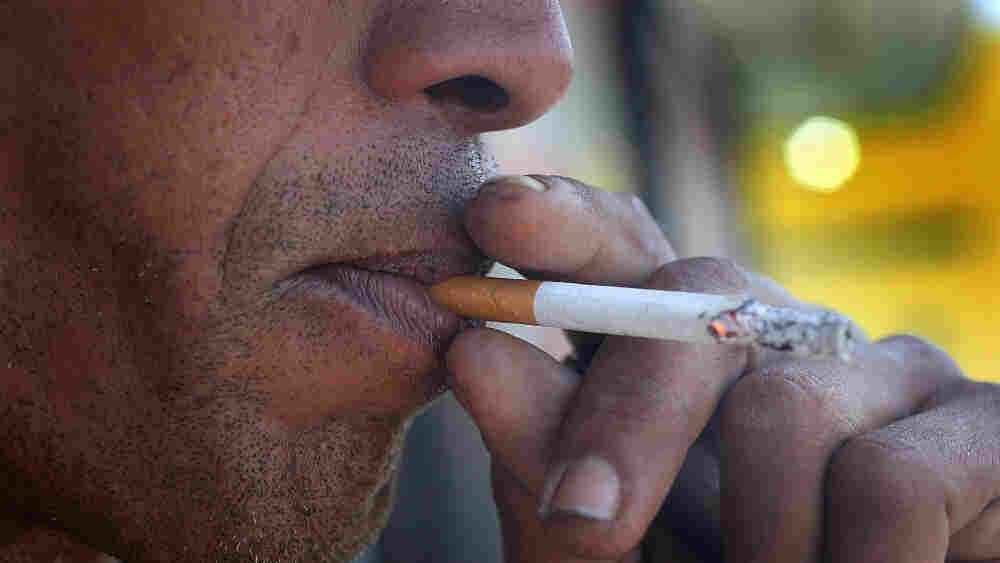 Gedwyn Power smokes a menthol cigarette in Miami in late March. On Friday, an expert panel will wrap up deliberations about advice to the Food and Drug Aministration on whether to ban menthol as a cigarette additive. Joe Raedle/Getty Images hide caption

Cigarettes are just plain bad, as we all know by now.

But what about the ones that contain menthol? Are they worse?

A panel of experts is mulling menthol and trying to come up with some advice for the Food and Drug Administration on whether menthol should be forbidden as an additive.

Young people seem to gravitate to menthol-flavored cigarettes, and there's evidence menthol may make it harder for smokers trying to quit. It turns out that tiny amounts of menthol are even added as a subtle flavor-enhancer to many cigarettes that aren't labeled as menthol types.

Should menthol be banned --- just as Congress has banned other flavorings in cigarettes? Tobacco industry representatives say taste is the only thing that distinguishes menthol cigarettes from regular one -- they aren't more harmful.

The use of menthol started accidentally, after mint crystals got left in a smoker’s tin of rolling tobacco overnight years ago.

The mint in menthol cigarettes may be natural or synthetic or a combination of both. Natural mint is crystalized from steamed distilled oil of the corn mint plant. Some 99 percent of the mint comes through in the smoke.

So how does the stuff get put on cigarettes? A bunch of ways. Sometimes, it's applied to the foil that is used to wrap the cigarettes. It's also sprayed on the tobacco, and even injected into the tobacco paper or the filter.

After a few weeks for aging, Michael Ogden of R.J. Reynolds says the effect was found to be the same pretty much regardless of method, according to smokers who volunteered for taste tests.

Menthol can be misleading. "Menthol leads to the perception of an increase in nasal airway openness but in fact there is no actual change and (some studies have shown) minor constriction," Ogden says

R.J. Reynolds is the maker of Kool and Salem, once the leading menthol brands. Now, Newport dominates the market. It's from Lorillard, whose Scientific Director William True can sound like someone on Top Chef when he describes how the company assesses menthol.

True says the company taste experts sample packs the way some people test fine wine. They are sensitive to such things as a cigarette's early draw, the tobacco's papery or woody flavors, whether it's bitter or sweet, has a later draw or an after taste.

But it isn't menthol's taste that is under scrutiny at the hearing.

The scientific advisory panel wanted to know what properties in mentholated cigarettes attract young people, African Americans, and other ethnic groups. Newport is the top menthol cigarette for adolescents, according to the federal Substance Abuse & Mental Health Services Administration. The thinking is that menthol mellows the harshness of tobacco, which makes it easier for initiates to inhale and others to inhale more deeply.

True objected strenuously. "Absolutely not," he says. "Our product developers do not use menthol in any shape or form to cover, mask or minimize that harsh taste. The most significant items that impact the harsh taste of the cigarette are the tobacco blend, the moisture level of the blend and the filter ventilation."

"Internal studies do not indicate that menthol cigarettes are smoked any differently or more intensely than non menthol," according to Lorillard's William True. "These studies reinforce the overwhelming weight of epidemiology literature that menthol and non menthol convey similar risk of chronic disease."