Accessibility links
Report Says Minnesota Beaches Among Cleanest, Florida's Among Dirtiest : Shots - Health News The Gulf oil spill has caused 10 times the number of beach closures so far this year, compared to all of last year, says a new report. Swimming in polluted water can increase the risk of pinkeye, hepatitis and neurological problems.

Vacation season has arrived in Washington. We can tell because the daily commuter traffic's a breeze and we can get reservations at our favorite restaurants on Saturday nights before 11 p.m. 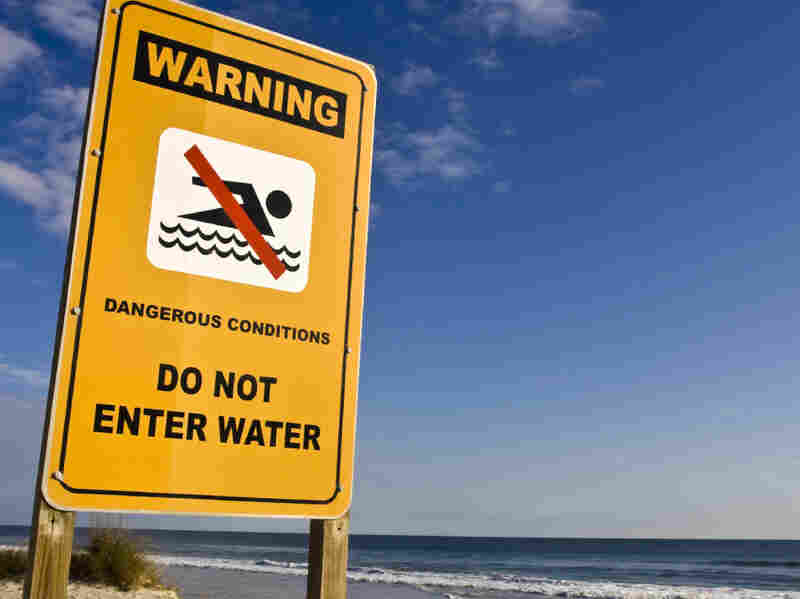 This is a sign you don't want to see on your vacation. iStockphoto.com hide caption

But if you want to go to the beach and haven't made plans yet, you might want to check out the Natural Resources Defense Council's 20th annual beach report first. Or you might find your vacation paradise ruined by dirty water.

According to the report, Minnesota, New Hampshire and California have some of the cleanest beaches around, in terms of water quality and state monitoring programs, while some parts of Florida, Maine and Mississippi have among the worst.

And, despite the First Family's much-publicized pending visit to the Gulf Coast region, and a certain governor's admonitions that the water's fine, a lot of it is not. (Here's the list of what's closed in the region.)

How bad can it be? A swimmer exposed to beach water pollution is at risk for stomach flu, skin rashes, pinkeye, dysentery, hepatitis, and neurological disorders, to name a few. Incidents have been growing steadily over the past few decades, and will likely continue, the report says.

The number one known pollutant in 2009 was storm water runoff, the report says, and the amount of polluted U.S. beach waters has remained steady over the last two years at about 7 percent.

NRDC suggests greening the infrastructure, conserving water, and improving testing can help clean up the water.