Accessibility links
Your New Flu Vaccine Is On The Way, A Little Early : Shots - Health News Flu season is in full swing in the Southern Hemisphere, with H1N1 the predominant strain in Australia and New Zealand. No one's predicting what our season will look like just yet.

We know you've been worrying about when you'll get your flu shot for the coming season, which probably begins in only three or four months -- but with flu, who knows? 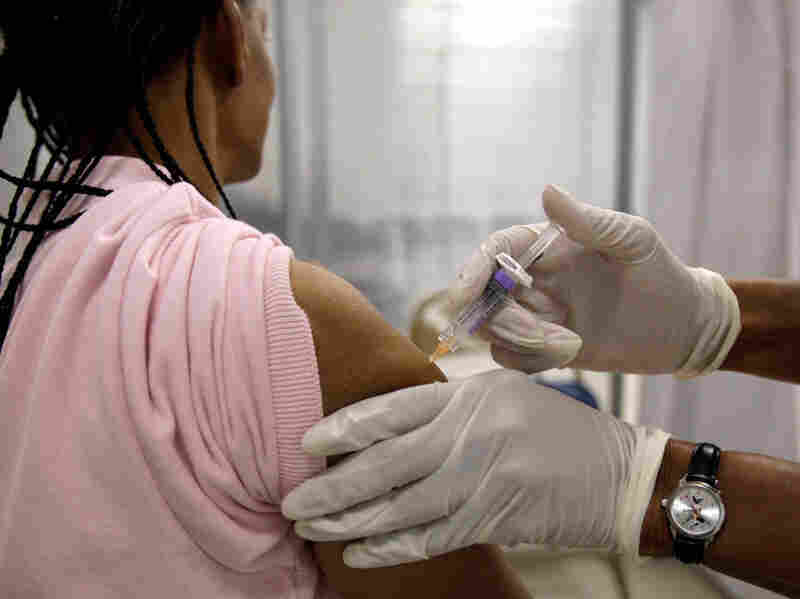 Get a flu shot, while it's hot. Jeff Roberson/AP hide caption

Well, rest easy. Doses of vaccine for you early birds went out to health care providers this week.

Usually flu vaccine starts shipping in August, manufacturers say. So they're a little ahead of schedule this year. Perhaps that's a result of the beefing-up of flu vaccine production capacity that's happened over the past couple of years.

Next season's flu vaccine contains the pandemic H1N1 strain that emerged in the spring of 2009 as one of its three elements. The others are H3N2 and influenza-B viruses. So this year, you'll probably only need to track down one shot for protection.

The largest supplier, Sanofi Pasteur, started shipping the first of 70 million doses of flu vaccine. Last year the company made 52 doses of seasonal vaccine and another 87 million doses of vaccine against the pandemic H1N1 strain.

GlaxoSmithKline has started to send out the first of 30 million doses it expects to make for this season.

Most Americans are supposed to get vaccinated against the flu. The Centers for Disease Control and Prevention recommends it for everybody over six months old. This year, people over 65 will get a special high-dose vaccine, with three times more inactivated flu virus than conventional vaccine. Turns out they need a higher dose to get a good immune response.

Of course, many people who should get vaccinated against the flu don't bother. Last year, the Department of Health and Human Services says, the government bought more than 162 million doses of the pandemic flu vaccine – but at least 40 million doses expired and were destroyed. It's not clear how much seasonal flu vaccine went to waste.

Health officials urge people to start getting flu vaccination as soon as it's available. Presumably that will be in the coming month.

Meanwhile, the Southern Hemisphere's flu season is continuing. The latest update from the World Health Organization says it peaked in South Africa this month. Down there, there wasn't much of the new H1N1 virus to be seen; most flu was caused by the older H3N2 strain or influenza-B viruses.

But in Australia and New Zealand, the new pandemic strain predominates – their flu season hasn't peaked yet.

What kind of flu season will the Northern Hemisphere have? Nobody's making any predictions yet.