Accessibility links
Poisonings Of Kids With Household Chemicals Decline, But Remain A Problem : Shots - Health News Common toxic products in the kitchen and garage can tempt curious kids. Despite a drop in injuries from household cleaners seen in emergency rooms, experts say there's more work to be done to prevent accidents.

Poisonings Of Kids With Household Chemicals Decline, But Remain A Problem

Poisonings Of Kids With Household Chemicals Decline, But Remain A Problem

Parents, babysitters and daycare centers, listen up. Lots of kids still get hurt by household cleaners and chemicals each year. 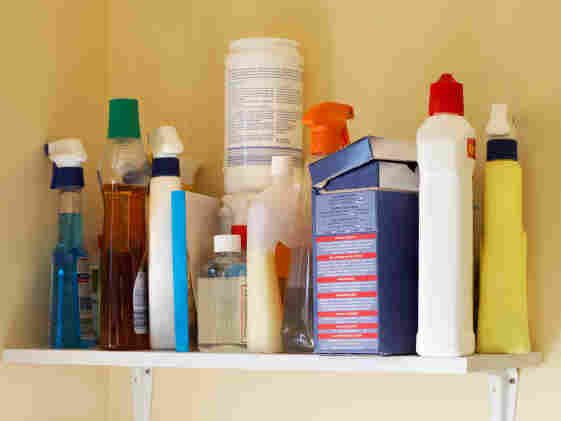 Keep the bleach away from kids. Jason Reekie/iStockphoto.com hide caption

A nationwide study suggests that we're doing a better job at protecting our kids, but there's a lot of room for improvement.

The decrease surprised the researchers. While they welcomed the drop, they were also careful to note that the overall decline isn't the whole story.

Accidents from chemicals in spray bottles increased. And the researchers think that there could be many more injuries out there because their study looked only at cases reported in emergency rooms.

The results will be published in September in the journal Pediatrics and are currently available online.

Kids between 1 and 3 years old accounted for almost three-quarters of the cases. More than half of the injuries were from kids eating or drinking the toxic products. The No. 1 problem: bleach, the chemical culprit nearly 37 percent of the time.

The risk to kids is greatest when they start to crawl or walk, and are still at an age when they spend most of their time at home, says lead author Lara McKenzie of the Center for Injury Research and Policy at Nationwide Children's Hospital in Columbus, Ohio. She says younger children are especially attracted to the bright colors and fresh scents of many cleaning products from the house.

To understand what your kids see, toxicology expert Dr. Heath Jolliff says just sit on your kitchen floor and look around. And, remember that kids act fast. Dr. Jolliff treats children at the Central Ohio Poison Center where he often hears parents say, "I was only out of the room for 10 seconds." His told Shots, "Yep, that's all it takes."

Jolliff explained that kids like to imitate adults. They might climb on stools to open cabinets that their parents didn't think were accessible. A can of insecticide can look like cooking spray, and a powdery sink scrubber can look like grated parmesan cheese.

Data from poison control centers around the nation suggests that the number of injuries in kids associated with household cleaning products increased slightly in the last decade, according to Jolliff. It's not clear, however, whether that increase reflects more accidents or parents turning more often to poison control centers than emergency rooms for help.

Experts' advice to parents remains largely the same: Lock cabinets containing toxic chemicals and keep products in original containers. For questions, try the local poison control center, which you can reach at 1-800-222-1222.

Jolliff suggests keeping the number in your cell phone.