Accessibility links
Keep Young Kids Away From Pet Food To Cut Salmonella Risks : Shots - Health News To minimize health hazards, young children should wash their hands regularly and not be allowed to touch pet foods and treats. Keep the dishes clean, too. 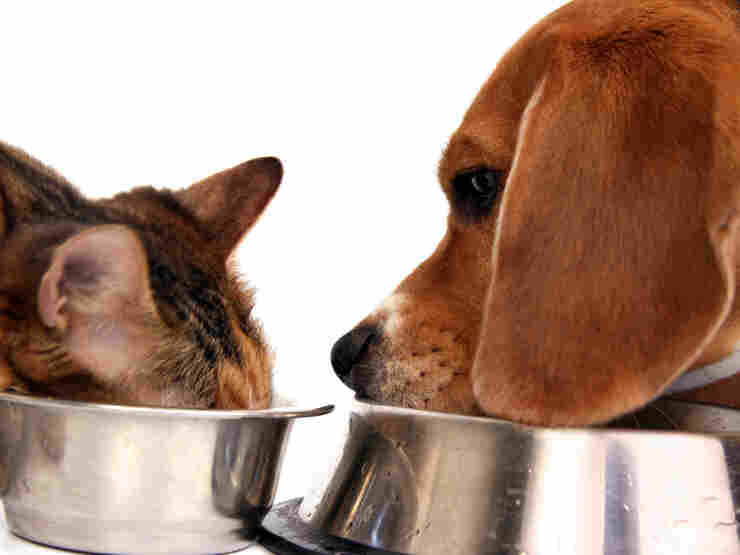 Bacteria may be worse than bites at feeding time. iStockphoto.com hide caption

One of my kids loves to eat dog biscuits. In fact, the little guy is so keen on stealing them from Fido's cookie jar that my worried wife called the biscuit company's help line last year to find out if the boy was in imminent danger.

The woman on the other end of the phone was pretty stern and said his taste in canine treats wasn't a very good habit, mainly because the biscuits could be rough on a youngster's digestive tract.

But there's another reason to shoo him and other kids away from the free pet food buffet: salmonella.

Researchers have tied a multistate salmonella outbreak over three years with dry dog and cat food. The study, published by the journal Pediatrics, finds about half the 79 people sickened by an uncommon salmonella strain were kids 2 years or younger.

The ultimate source of the infections was a Pennsylvania factory that made more than 100 brands of pet food and was identified only as "plant X" in the research paper.

A quick stroll through the references reveals the factory was a Mars Petcare US facility in Everson, Pa, that has since been closed. In 2008, though, recalls of food made there included various batches of Pedigree and Red Flannel brands, among others.

There's not much parents can do about contamination at a pet food factory. But one precaution worth considering at home is feeding the dog or cat somewhere other than the kitchen.

The researchers found kids who got sick in the outbreaks were four times more likely to live in homes where pets dined in the kitchen than similar kids who didn't get ill.

Dry pet food, as the researchers write, "is not manufactured to be a sterile product." The Food and Drug Administration does regulate the industry, and there's been an awful lot of recalls lately to lower the risks for pets and their owners.

Even so, the risk from foodborne illnesses from pet chow won't ever go away completely. The authors of the study say there are some ways to minimize the hazards in any case: