Accessibility links
Democrats Extend Medicaid Subsidy, But Miss Out On COBRA : Shots - Health News In an unusual August session, House Democrats pushed through an aid package that will boost state Medicaid budgets. But, the lawmakers whiffed on extending a popular insurance subsidy for the unemployed.

Democrats Extend Medicaid Subsidy, But Miss Out On COBRA

Democrats Extend Medicaid Subsidy, But Miss Out On COBRA 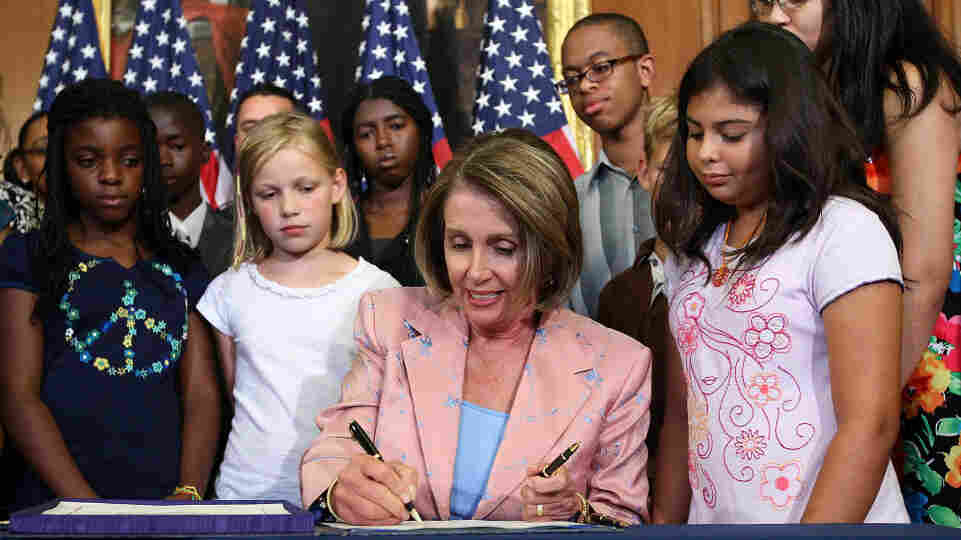 More than four months after the triumphant passage of health overhaul, Democrats succeeded in clearing another part of their health care agenda: $16 billion in extra federal Medicaid assistance to the states.

Party leaders had tried a bunch of times to keep the Medicaid money flowing, finally succeeding when they added $10 billion in aid for teacher salaries to the package Tuesday.

On the House floor Tuesday, Democrats cast the package as vital for preserving jobs and help ailing states, battered by tough economic times.

Republicans, not so much. They claimed the measure was another example of excessive Democratic spending the nation can't afford. "There is no emergency," said Rep. Joe Barton of Texas, the ranking Republican on the House Energy and Commerce Committee. "There is no pending financial catastrophe."

Au contraire, said Rep. Henry Waxman, (D-CA), who chairs the Energy and Commerce panel. The money would help educate children and provide health care to vulnerable people. "What could be more important?" he asked.

How did we get here? The Medicaid funding saga began way back in February 2009. With states facing a financial double-whammy of less revenue due to the recession and more demand for health services, Congress included extra money in the federal stimulus package, upping the federal government's share of Medicaid costs from between 50 and 76 percent (depending on the per capita income of the state) to between 61 and 84 percent of all Medicaid spending.

The higher matching rate was originally slated to expire at the end of 2010, but an early version of the jobs bill extended the funding another six months, at a cost of $24 billion.

Because state officials were convinced the new money was imminent, 29 states factored the funding into their budgets for the fiscal year that ends June 30, 2011. But concerns about deficit spending kept the measure from being approved. It was stripped from the House-passed bill in late May. Finally Tuesday, the impasse was broken. The scorecard: states will get the Medicaid money, but at a lower rate, and it will end at the end of June.

Meanwhile, the prospects for action on what was once another Democratic health care priority are dimming. The COBRA subsidy provided newly laid-off workers with a 65 percent subsidy to help them stay on their former employer's health plan.

This assistance was also authorized in last year's stimulus bill and was extended three times, through the end of May, but was also jettisoned an extension of the money over cost concerns.

Since the beginning of June, workers still have the right to stay on their former employer's health insurance plan for up to 18 months. But they must now pay the entire cost of the premium, an expense that is often prohibitive. And with border security and small business legislation looming, as well as November elections, the COBRA subsidy seems unlikely to come back this fall.