Accessibility links
Medical Journal Retracts Report About Jesus Curing Fever : Shots - Health News Only weeks after publishing a piece that speculated on a biblical account of a feverish woman cured by Jesus, a journal editor has withdrawn the paper and apologized for running it. 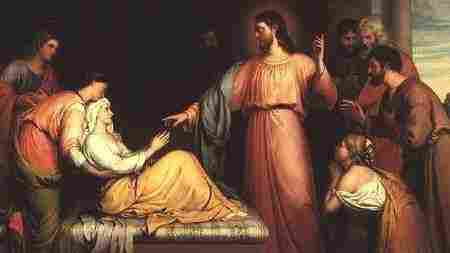 This painting by John Bridges depicts Christ healing the mother of Simon Peter. A scientific paper speculating on the nature of her illness sparked a controversy and was withdrawn. Wikimedia Commons hide caption

Here's a scientific rowback for the ages.

Only weeks after publishing a piece that speculated on a biblical account of a feverish woman cured of influenza by Jesus, the editor of Virology Journal has retracted the paper and apologized for ever running it.

A bunch of folks noticed this flap before we did, including Dr. Ivan Oransky, who moonlights from his day job as executive editor at Reuters Health as a blogger for Retraction Watch.

Here's what happened. A commenter on the journal article questioned the paper, based on passages from the New Testament, saying "it is unclear how this case report meets any of the normal standards of a scientific article or the minimal standards of any journal other than someone actually paid to have it published."

The journal's top editor, Tulane's Dr. Robert Garry, first defended the paper, saying in a comment that it had been read and reviewed by two experts before publication.

But then Garry apparently had second thoughts. In a subsequent comment,  he wrote:

As Editor-in-Chief of Virology Journal I wish to apologize for the publication of the article entitled ''Influenza or not influenza: Analysis of a case of high fever that happened 2000 years ago in Biblical time”, which clearly does not provide the type of robust supporting data required for a case report and does not meet the high standards expected of a peer-reviewed scientific journal.

He acknowledged that the article didn't "meet thresholds for balance," adding, "the article will be retracted."

Thursday morning, Oransky got comment from the paper's lead author, Dr. Ellis Hon of Hong Kong. Hon said he agreed to the retraction and that he "was astonished that our article, submitted initially in the debate section of the journal, had stirred up such negative publicity."

The idea for the article was to spark medical debate, though not quite of this sort, Hon conceded:

[T] here was no absolute right or wrong answer, and the article was only meant for thought provocation. Neither was it meant to be a debate on the concept of miracles. My only focus at the time of writing was "what had caused the fever and debilitation" that was cured by Jesus.