Accessibility links
Salmonella Cases Rise As Recall Of Contaminated Eggs Grows : Shots - Health News Contaminated eggs appear to have caused more than 1,000 salmonella cases, and the toll is rising. More than 380 million eggs from five different farms have been recalled as a probe of the company widens. 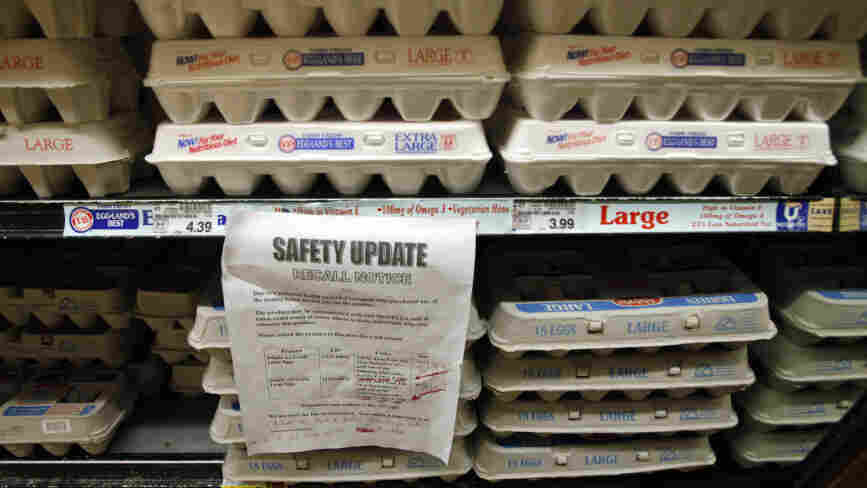 A sign in a Los Angeles supermarket warns customers about a recall of certain lots of eggs that had been previously sold in the store. Reed Saxon/AP hide caption

Although it's still unclear exactly how many people have become sick with salmonella after eating contaminated eggs, it's a lot. And the toll is rising.

For the three months ending in July, there were 1,953 cases of salmonella sickness reported, according to the Centers for Disease Control and Prevention, CNN reports. The usual number of cases for that period would be 700, a CDC official said in a conference call Thursday. So that could mean 1,200 or more people got sick from bad eggs.

"If there are indeed more than 1,000 cases, that's a large outbreak," Michael Doyle, professor of food microbiology at the University of Georgia's Center for Food Safety, tells Shots. During the salmonella outbreaks linked to tainted peanut butter a few years back the reported illnesses amounted to a few hundred, he says.

"The magnitude of this outbreak is eye-opening," he adds, and the cases so far bolster previous epidemiological evidence that eggs are a primary source of salmonella infections for humans.

Eggs produced by Wright County Egg in Iowa are the source of the problem this time around. More than 380 million eggs from five different farms have been recalled as a probe of the company widens. For a rundown of the affected brands, see this list from Egg Safety Center.

The Food and Drug Administration has gone into high gear, sending a team of 10 investigators to Iowa to inspect the Wright County Egg's farms and to zero in on the source of the trouble.

The salmonella outbreak could have been avoided if new safety rules that took effect in July had been in place earlier, the Des Moines Register reported, citing an FDA official. Exactly which changes would have made the difference, she didn't say. Some of the affected eggs were produced as early as May, the paper said.

For big egg suppliers, like Wright County, the rules require refrigeration of eggs in storage and in shipment as well as various precautions to prevent contamination in the first place.

Update: Though a spokeswoman, Ian Williams, head of CDC's foodborne outbreak surveillance, said the number of cases of salmonella seen is "unusual." The strain identified "commonly occurs in the U.S., [so] some of the cases identified with this outbreak strain may not be related to this outbreak" linked to eggs.