Accessibility links
Bottled Tea Comes Up Short In Antioxidant Tests : Shots - Health News If you're buying bottled tea because you think antioxidants inside will help keep you healthier, you might try making the tea yourself. Tests show low levels of antioxidants in samples of commercially produced tea.

Tea companies like to brag about the antioxidants in their bottled tea beverages.

Some even put the amount of antioxidants on the label. But if you think that you’re getting a big dose of these natural chemicals from your favorite bottled brew, think again. 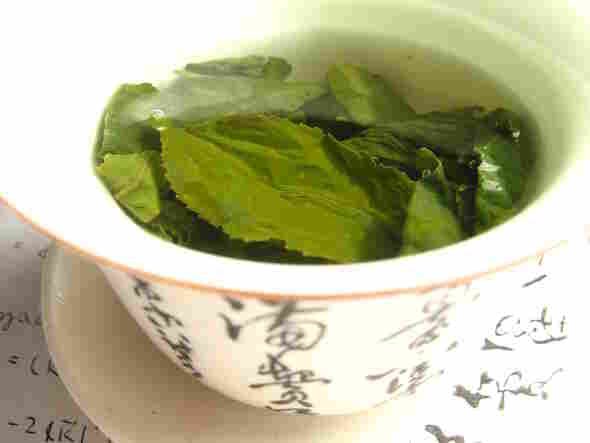 If you're looking for antioxidants in tea, you're better brewing your own rather than buying the bottled stuff. iStockphoto.com hide caption

Reseachers tested bottled teas for antioxidants called polyphenols and found that most brands contain very little of them.

“Out of 49 samples, half of the bottle teas contain less then 10 milligrams of polyphenols,” says Shiming Li, a natural products chemist at WellGen, a company that's working to develop foods for medical use.

A cup of home-brewed green or black tea has 50-150 milligrams of polyphenols. So you'd have to drink between 5 and 20 of those pint-size bottles of tea to get the same amount of antioxidants. That’s a lot of tea.

The research findings were presented this weekend at an American Chemical Society meeting in Boston. Li says the analysis was part of WellGen research toward developing a product for diabetes that contains tea concentrate.

Despite the poor antioxidant content, tea companies have benefited from the healthy image of tea. Li says that sales of bottled teas have increased 90 percent since 2004. And considering how much more bottled teas costs than tea bags, consumers could aren’t getting a bargain when it comes to antioxidants.

Tea experts have been hip to the low polyphenol levels in bottled teas for a while now. "Bottled teas are a scam," declares Susanne Henning, a researcher at UCLA who has been studying the health effects of tea for years. "They’re mainly sugar water."

Henning says that polyphenols in tea start breaking down after the tea is brewed. So if a bottle has been sitting on the shelf for a while, there may be only a little -- if any -- antioxidants in the tea. Such small amounts, says Henning, won’t provide any of the health benefits associated with tea. Plus, many tea beverages have just as much sugar as soda.

To get the most out of your tea, Henning suggests brewing a fresh batch in the morning and drinking the tea throughout the day. After 24 hours, she says, the tea should be chucked. Green tea extract is another good option, she says.

As for bottled teas, there’s nothing wrong with drinking them if you like the taste. Just don’t expect them to do much for your health.